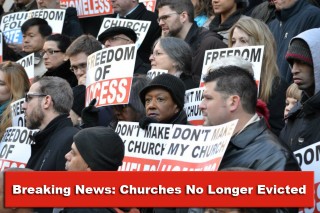 The Alliance Defense Fund (ADF) won on Friday a permanent injunction in the 17-year legal battle involving the Bronx Household of Faith and the NYC Board of Education. Religious groups will now be allowed to meet freely for worship services in public school facilities.

"Churches that have been helping communities for years can continue to offer the hope that empty buildings can't," expressed ADF Senior Counsel Jordan Lorence in a statement. "The court's order allows churches and other religious groups to meet for worship services in empty school buildings on weekends on the same terms as other groups. ADF will continue to defend this constitutionally protected right if the city chooses to continue using taxpayer money to evict the very groups that are selflessly helping the city's communities, including the public schools themselves."

The ADF had argued against claims that allowing congregations to come on Sundays to worship at public schools would be seen as government endorsement of religion, and insisted that churches would not be doing anything that religious groups at school are not already allowed to do.

The Bronx Household of Faith case began in 1995 when its application to rent a public school building for Sunday services was rejected by the New York City Department of Education. The ADF has been representing the church ever since, and in February of this year won a court order granting temporary permission to New York's churches to continue meeting at public schools for weekend services. New York had been the only city in the nation that banned worship services in vacant public school buildings.

"I think that there are school officials and also Mayor (Michael) Bloomberg that unfortunately are clinging to a very absolute view of the Establishment Clause. They do not understand that the government should accommodate freedom of speech for religions. They view religions as something evil or bad that needs to be driven from the public schools. All we are asking is that we are treated the same as everybody else," Lorence told CP after a court meeting on June 1.

During the meeting, Jonathan Pines, the Department of Education's attorney, positioned that congregations should not be permitted to gather for weekend services at schools because an outside observer could interpret the worship as government endorsement of a specific religion.

Lorence insisted, however, that since schools already give way to student groups engaging in religious practice by holding Bible discussion groups, where students can sing hymns, pray together, and engage in Christian discussion, it would make little sense to deny churches the freedom to do the same on weekends when schools are not in session.

Pastors, school officials and community members have described the public school churches as greatly beneficial to the community. They have helped buy school materials for poor children, assisted the disable, donated computers and air conditioners, and established rehabilitating programs for people struggling with addiction and life issues.

"There is no reason to exclude worship services from these empty school buildings, especially when the school allows all other community groups to meet," Lorence added. "Why exclude churches that are helping their neighbors in so many significant ways?"