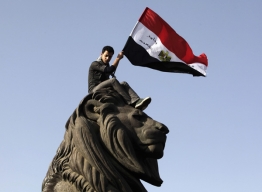 A demonstrator carries an Egyptian flag near Tahrir square as demonstrators gather to mark the first anniversary of Egypt's uprising, January 25, 2012.
A report recently published describes the growing concern surrounding the increasingly common abductions and forced conversions of Coptic Christians in Egypt in the wake of the uprisings that overthrew former President Hosni Mubarak early in 2011.

The report, entitled “Tell My Mother I Miss Her,” was commissioned by Christian Solidarity International (CSI) and reveals with certainty that “Coptic women and girls are deceptively lured or abducted into forced marriages with Muslim men” while also being forced to renounce their faith and convert to Islam. These actions generally occur after the women are threatened or even physically abused.

The findings added to a previous report by CSI published in 2009 entitled, “The Disappearance, Forced Conversions and Forced Marriages of Coptic Christian Women in Egypt,” and aims to illicit action from government bodies and the international community.

The report was authored by Michele Clark, adjunct professor at George Washington University and Nadia Ghaly, a Coptic human rights activist. The research for the report was conducted in Egypt during the political uprising of the Arab Spring in November 2011. During that period Egyptians saw the rise of the Muslim Brotherhood and other fundamental Islamist forces.

Clark and Ghaly have both connected the increase in Coptic women and girls disappearing and being forcibly converted, to the volatile period since President Mubarak was removed from power in February 2011.

“Denial and obfuscation will neither help victimized Christian women, nor challenge the religious bigotry and sexism that impedes the development of democracy in Egypt,” Dr. John Eibner, CEO of CSI-USA, explained.

Dr. Eibner has repeatedly sought help from not only the U. S. State Department but also various non-governmental organizations that specialize in women’s rights, human trafficking and religious liberty. He has sought their help to increase pressure on certain government bodies that have taken little action over helping the persecuted women in Egypt

“Abducting and converting Coptic girls to Islam is not only a result of the paranoid and racist incitation against the Copts, but it is an organized and pre-planned process by associations and organizations inside Egypt with domestic and Arab funding as the main role in seducing and luring Coptic girls is carried through cunning, deceit and enticement or through force if required,” according to Magdy Khalil of the Middle East Freedom Forum.