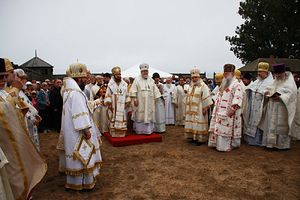 On August 25, 2012, with the blessing of His Holiness Patriarch Kirill of Moscow and All Russia, His Eminence Metropolitan Ilarion of Volokolamsk, President of the Moscow Patriarchate’s Department of External Church Relations, and His Eminence Metropolitan Hilarion of Eastern America and New York, First Hierarch of the Russian Orthodox Church Outside of Russia, officiated at Divine Liturgy in Fort Ross, CA, the first Russian settlement in California.

Liturgy was celebrated under the open skies near the renovated Holy Trinity Church. The two metropolitans were joined by His Eminence Archbishop Justinian of Naro-Fominsk, Administrator of the Patriarchal Parishes in the USA; His Eminence Archbishop Gabriel of Montreal and Canada (ROCOR); His Eminence Archbishop Benjamin of San Francisco and Western America (Orthodox Church in America); His Grace Bishop Peter of Cleveland, Administrator of the Diocese of Mid-America and Chicago (ROCOR); His Grace Bishop Theodosius of Seattle, Vicar Bishop of the Western American Diocese (ROCOR), and clergymen of the Russian Orthodox Church and Orthodox Church in America. Also praying at the service were His Eminence Metropolitan Gerasim of San Francisco (Constantinople Patriarchate) and His Grace Bishop Daniil of Dragovitsa (Bulgarian Patriarchate), along with a multitude of believers from Russia, the US, Canada and other countries. Also in attendance was Mr VN Vinokurov, Consul General of the Russian Federation to San Francisco.

After the ambo prayer, Metropolitan Ilarion delivered the following sermon:

“Your Eminence, Vladyka Metropolitan Hilarion of the Russian Orthodox Church Outside of Russia, Your Eminences, Your Graces, Dear Fathers, Brothers and Sisters!

First of all I would like to pass on the blessing of His Holiness Patriarch Kirill of Moscow and All Russia, by whose blessing I am visiting North America in order to celebrate Divine Liturgy together with Metropolitan Hilarion and a host of hierarchs here at Fort Ross to mark the 200th anniversary of its establishment as the first outpost of Russia on the American land.

Of course, this site is of great importance to us. Even as we approach this locale, we see the stark landscape—ocean, mountains—and we lose our cell-phone connection, and we feel as though we are in another world, not in today’s blossoming nation of America, but a place where human civilization has not yet reached. It is difficult to imagine what this land was like two hundred years ago, when Russian entrepreneurs chose this place to build a wooden fortress. Wherever Russian went in this world, they first and foremost built churches. This was connected to the fact that Russians always sensed a special proximity to God and a special sense of their historic duty to spread the Christian faith.

The Russian Orthodox Church was always a multi-national, missionary Church. As soon as Russian missionaries set foot on American soil, Orthodox witness commenced among the local population: first in Alaska, among the Aleutians, then further south, among native Americans. Such outposts as Fort Ross did not only serve as points of trade, but became missionary centers. And today, two centuries later, such places have special meaning for us, mostly as centers from which Orthodoxy was spread on the American land.

Today, there are over a million souls professing Orthodox Christianity in America, so many towns and cities have Orthodox churches. But back then, this was not the case, and America could have been considered a spiritual desert, and the light of Orthodoxy came to the American continent thanks to the efforts of Russian missionaries. For over a century, there was no Orthodox Church in America besides the Russian Orthodox Church, or as it was then called, the Russian Greek-Catholic Orthodox Church.

The great Russian missionaries such as St Innocent (Veniaminov) and St Tikhon, the future Patriarch of All Russia, labored here, motivated by one desire: to bring the light of faith in Christ to as many people as possible regardless of their nationality or language. Today’s Orthodox Church in America, even if it is divided into several jurisdictions, carefully preserves the legacy of those Russian missionaries and remembers them as pillars and founders of the Orthodox faith in this land.”

In memory of the 200th anniversary of the founding of Fort Ross, the President of the DECR gave Holy Trinity Church an icon of St Tikhon, Patriarch of All Russia.

He then granted ecclesiastical awards to those who worked especially hard for the good of the Church. Mr Vinokurov was given the Medal of St Sergius of Radonezh, Third Level, and representatives of Fort Ross Museum and other benefactors were given a Patriarchal decree of blessing.

After Liturgy, a procession of the cross was made around the walls of For Ross, then went to the cemetery, where a commemorative litiya was performed. A plaque was then unveiled with information on the Russian settlers buried there.

The Official Website of the Russian Orthodox Church Outside of Russia