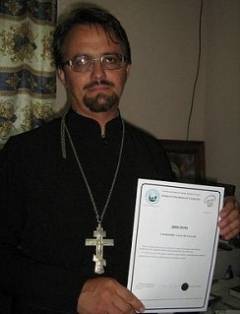 An Orthodox priest in the Volgograd (formerly Stalingrad) region of Russia has been commended by the Russian Ministry of Health for his work in reducing the number of abortions in his district. His personal efforts in counseling and helping women to keep their babies has reduced the abortion rate in the Volgograd region by 25 percent over the past five years.

Father Alexis Tarasov began his life saving work in his own parish in the town of Voljsk, where he said he spent hours talking with women who were considering abortion. He expanded his pro-life work with visits to the local hospital. Then, he and other like-minded priests, established a crisis pregnancy center.

With the support of his diocese, he approached the local authorities for help to expand the project.

The result was the creation of the Center for the Protection of Motherhood and Childhood, under the supervision the Archangel Raphael Orthodox Medical Society.

According to the Department of Health, more than 2,000 Volgograd women have chosen to abandon their original intention to have an abortion since that time.

Father Alexis explained that the focus of his project is simple: to provide women with trained and sympathetic listeners who will hear their concerns, give them full information on the abortion procedure and its potential effects on her own health and well-being, and offered them the material help they need.

“Quite often, the only thing needed to dissuade a mother from this terrible decision is simply to talk to someone with an open heart,” Father Alexis said.

Natalia Ermishkina, 31, is one of the women that Father Alexis dissuaded from abortion. The young mother said she had lost her room in subsidized housing after being abandoned by the man who promised to marry her and raise their child. Out of desperation, Natalia decided to get rid of the child.

“The psychologist in prenatal listened to me and advised me to speak to Father Alexis,” said Natalia. “I went to him and I do not regret it. I gave birth to Alexandra, and the Center helped me with housing and clothes for the child. I have a daughter, and now begin to believe in and look forward to a better life.”

“Today, all women seeking abortions are sent by gynecologists for consultation with the psychologist working at each prenatal hospital,” said Nikolai Zarkin, head physician of Volgograd’s Central Maternity Hospital № 2.

Zarkin said after these consultations, 20 percent of women refuse abortion and give birth to their children.

Father Alexis has organized help for mothers after their children are born by providing legal aid as well as clothing at the Center for the Protection of Motherhood and Childhood, and looks forward to providing more housing.

“Wherever possible, we strive to help women in need. There is now an acute need for the establishment of more homes for moms who need housing. It is essential to build homes and equip them so that women can live with their children until their housing problem is resolved,” said Father Alexis. “But it is difficult without help from the authorities and, without benefactors, we can not do it.”

Pravoslavie News reports that Father Alexis has been given an award by the World Congress of Families for his many years of pro-life work.