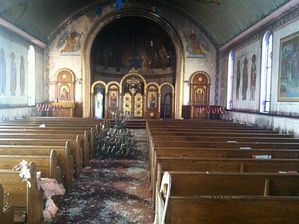 A church community is left heartbroken and devastated after an early morning fire took place on one of their biggest days of the year.

“I live up the street, I was woken up by the fire trucks and I was devastated. I grew up in this building, I grew up in this church with this community, with these people since I was pretty much born," said Adam Teper, an Altar Server at St. Michael's.

Captain Michael Morin of the Woonsocket Fire Department said he believes the cause of the fire stemmed from a service held Tuesday night.

“They had a service the night before, they were using incense, and it was a product of charcoal, I believe incense they used wasn’t properly disposed of after.”

“We have a strong community, so I know that we will rebound. But there’s going to be a lot of broken hearts in our community today.”

Because that day is so special, Perkins began a service around 11 a.m. in a parish hall next to the church that was not damaged.

The inside of the church remains heavily damaged, mostly to the right rear of the building.

All 26 members of Woonsocket's fire department fought the fire, and said they had a tough time putting the flames out due to the construction of the building.