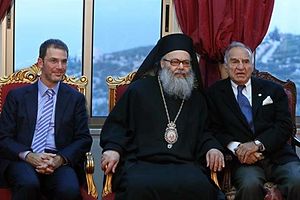 Yazigi receives congratulations after being elected.
Christians belong in Syria and will remain there despite the challenges facing them, newly elected Greek Orthodox Patriarch John X Yazigi said Monday.

Yazigi, bishop of Western and Central Europe, was elected Greek Orthodox patriarch of the Levant and Antioch, succeeding Patriarch Hazim Ignatius IV who died earlier this month in Beirut.

“Christians are staying in Syria because the land is theirs and they will not leave it,” Yazigi said in remarks to reporters shortly after the news of his election was made public around noon.

The 57-year-old Yazigi was elected with at least ten votes during a meeting at Balamand Monastery near Tripoli, officials with knowledge of the Monday meeting told The Daily Star.

The election took place during a gathering of 18 bishops from Greek Orthodox archbishoprics around the world who had arrived to Lebanon to elect Hazim’s successor.

Hazim’s 33-year service at the head of the church came to an end earlier this month after the patriarch suffered a stroke.

Like Hazim, Yazigi is also Syrian. He was born in Latakia in 1955.

In 2008, Yazigi was elected Metropolitan of Western and Central Europe after serving four years as the abbot of Balamand Monastery.

Yazigi, who first graduated from Latakia’s University of Tishreen with a bachelor degree in Civil Engineering, continued his studies at St. John of Damascus Institute of Theology. He then earned a doctorate in theology from the University of Thessaloniki in Greece in 1983.

Rebuffing claims that the ongoing violence in Syria between the regime and the opposition is leading to an end to Christian presence in Syria, Yazigi said that people of Syria will endure the current challenges as they have done in the past.

“In difficult times throughout history, many said that this is the end [for Christians], but with our faith we carried on and we will now,” Yazigi said.

He called on Christians in Lebanon and Syria to stand united against all difficulties, adding that Christians and Muslims in the region share the same fate.

“We are one family and our fate is one. Our journey is toward serving this people and God help us to prevail in this journey,” Yazigi said in a news conference following the meeting.

“We are from this land and this land is part of us,” he said.

Lebanese politicians welcomed the election of the new patriarch and voiced hope that he succeeds in fulfilling the church’s mission in the region.

“We are confident, especially in these times of great transformations in the region and the Arab world, your [Yazigi] words will have a positive effect in speaking the truth and continuing the establishment of a rich coexistence with Muslims and the establishment of one national identity,” Hariri said.

In a telephone call Monday with Yazigi, Mikati voiced hope that the new patriarch succeeds in spreading his message of forgiveness between the people of the region.

For his part, Lebanese Forces leader Samir Geagea praised the election of a new patriarch and said he is confident that Yazigi is a good successor for Hazim.

“We wish all the best for the Greek Orthodox Church and its members in Lebanon, the Arab world and the world,” Geagea said in a statement.

“I wish you success and I reiterate my confidence in your national and humanitarian role,” Finance Minister Mohammad Safadi said in a congratulatory letter.

The Balamand Monastery will welcome guests to congratulate Yazigi on his election Tuesday and Wednesday from 10 a.m. to 12 p.m. and from 4 p.m. to 7 p.m.