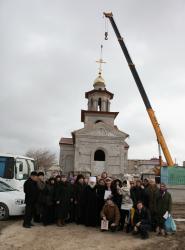 The workers installed domes with crosses on the Temple of Job the Righteous and Long-Suffering in time for Theophany, the January 19 Orthodox holiday.

The metropolitan of Tashkent and Uzbekistan, Vikentii, pronounced the holy liturgy and blessed the temple's crosses and domes earlier this month.

Construction on the temple began in November 2008.