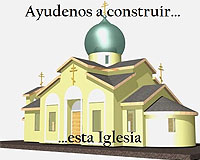 Concepcion is Chile’s second-largest city with a population of 1.5 million. Among the Orthodox Christians living there are Russian emigres of the post-World War II period and their descendants, Russian and Ukrainian immigrants after the fall of the USSR, Palestinians, as well as Chilean converts.

Orthodox services have become a regular occurrence since March, 2006, in a building in the Arab section known as Estadio Arabe. They are conducted mostly in Spanish, some prayers are read in Church Slavonic and Arabic. Concepcion’s Protopriest Alexei Aedo Vilugron of the Russian Orthodox Church Outside of Russia conducts the services. The parish belongs to ROCOR’s South American Diocese under His Grace Bishop John of Caracas and South America.

Fr Alexei is Chilean by birth, having accepted Orthodox Christianity with his heart and soul. By his efforts and persistence, his focus and a great deal of labor, with reliance on God’s help, work on building the first-ever Orthodox Church in the south of Chile commenced in August 2011.

The consecration of the cornerstone and erection of a cross on the site of the future church was performed by Vladyka John on December 5, 2010, in the presence of representatives of the local authorities and of the Russian Embassy.

The Palestinian community of Concepcion donated the parcel of land for the church (costing approximately US $144,000 and measuring 758 sq. m.).

Donations by the parishioners covered all the expenses of the preliminary construction stages (planning and documentation). In July 2011, the community received aid from the Chilean government in the amount of 30M pesos (about $63,000). The funds covered closing the perimeter of the property, excavations, foundation (1.5 m deep and 1.1 m wide), and the metal framework for the walls. Concepcion is in within Chile’s earthquake zone: the last earthquake, which struck in February 2010, measured 8.8 on the Richter Scale. For this reason, construction standards here are stringent and costly. Construction has been temporarily halted due to a lack of funds. The second stage of construction will cost $135,000. We would be grateful for any help in building our church to the glory of God. Donations can be made by visiting www.misionortodoxa.org

The Russian Orthodox Church outside of Russia