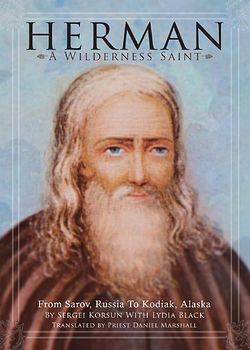 A new book on St. Herman of Alaska entitled, Herman A Wilderness Saint From Sarov, Russia to Kodiak, Alaska was released in November 2013 by the Printshop of St. Job of Pochaev. It was written by Sergei Korsun with Lydia Black, translated by Fr. Daniel Marshall, and available from Holy Trinity Publications.

Sergei Korsun is the Chief Specialist in the Department of America within The Peter the Great Museum of Anthropology and Ethnography in St Petersburg, Russia.

Dr. Lydia Black was a renowned historian and anthropologist of Russian America, who taught for many years at the University of Alaska. Her other works include Russian in Alaska, 1732–1867 and The Journals of Iakov Netsvetov: The Yukon Years, 1845–1863.