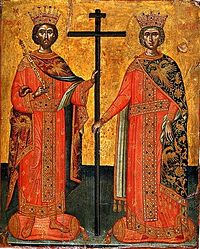 At the suggestion of the Romanian Patriarch Daniel, the Synod of the Romanian Orthodox Church has proclaimed 2013 the Year of the Holy Emperor Constantine and the Holy Empress Helen, Equals-to-the-Apostles, in honour of the 1700th anniversary of the Edict of Milan, reports Sedmitza.ru. According to the official website of the Patriarchate of Romania a plan of commemorative events has been drawn up.

In the second half of 2013 there will be a series of events in Romania under the common name “Emperor Constantine and his Mother Helen – Pillars of the Church”.

In October 2013 the Synod of the Romanian Church will hold its commemorative meeting in the Patriarchal Palace, where there will at that time be an exhibition concerning the Holy Emperor Constantine and the Holy Empress Helen and the churches dedicated to them.

During the year the pilgrimage department of the Romanian Orthodox Church is arranging pilgrimages to Rome, Milan, Constantinople, Jerusalem, Nis as well as to other places connected with the life and activities of the holy Equal-to-the-Apostles.

The Romanian Orthodox Church has also proclaimed 2013 the memorial year of the Romanian theologian and teacher of dogmatic theology, Archpriest Dumitru Staniloe (1903-1993). During the memorial year, there will be a series of events of a theological and cultural character in Bucharest and other cities, associated with the life and service of Fr Dumitru.