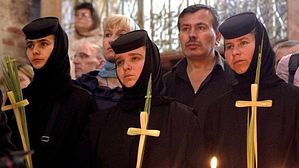 After negotiations, held in a spirit of brotherly respect and mutual help, an agreement was reached on the opening of the Romanian dependency in Jericho, which has now been recognized as “home” to Romanian pilgrims visiting the Holy Land.

A document has been issued with the blessing of Patriarch Theophilos of Jerusalem and Patriarch Daniel of Romania, stating the restoration of Eucharistic communion between the two Churches.

We recall that on May 9, 2011, the Holy Synod of the Patriarchate of Jerusalem “unanimously and with regret decided” to break off Eucharistic communion with the Romanian Orthodox Church.

The reason for the conflict was a dispute about the building of a church by the Romanian Orthodox Church on the canonical territory of the Patriarchate of Jerusalem. Negotiations between official representatives of the two Local Churches as well as correspondence between the Patriarchs of Jerusalem and Bucharest had failed to resolve the contentious question.