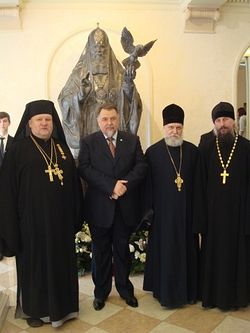 On February 23, 2013 the authorized representative of the Ukrainian Church on matters of higher education and science, Archimandrite Viktor (Bed) took part in the enlarged session of academic council of the National Medical-surgical N.I. Pirogov Center (Moscow), arranged for unveiling of the first monument to his Holiness Patriarch Alexiy II — the first honorary doctor of the Pirogov Center, according to "RUSKLINE" website.

The initiator of unveiling of the monument to his Holiness Alexiy II, Patriarch of Moscow and All Russia was the president of the Pirogov Center, authorized representative of the Uzhhorod Ukrainian Theological Academy in the Russian Federation, academic, Archpriest Yuri Leonidovich Shevchenko, who at one time had been closely acquainted with Patriarch Alexei II and had received his blessing to receive a higher theological education, to build a Church dedicated to St. Nicolas the Wonder-worker, and to be ordained into priesthood in the Ukraine.

Authorized representative Archimandrite Viktor (Bed) passed to all present blessings and greetings from Metropolitan Vladimir of Kiev and All the Ukraine, and congratulated them with this event. Patriarch Alexiy went down in history as the Patriarch of Moscow who on October 27, 1990 read on Sophia Square in Kiev the charter (tomos) of restoration of historic canonical-legal status of the Ukrainian Orthodox Church (the Metropolia of Kiev, founded in 862) as self-governed in its administration with wide rights of autonomy. 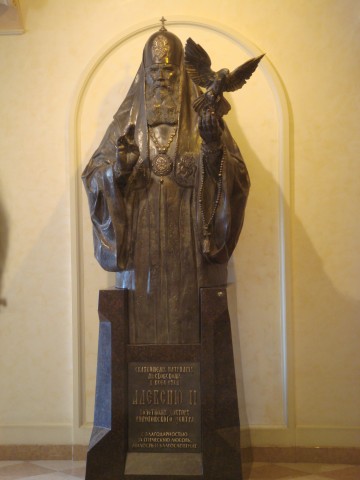