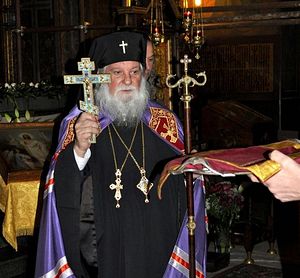 On March 3, 2013, the Sunday of the Prodigal Son and the 135th anniversary of Bulgaria's liberation from the Ottoman yoke, Metropolitan Dometian of Vidin served the Divine Liturgy at the Dependency of the Russian Orthodox Church in Sofia with the blessing of Patriarch Neophyt of Bulgaria. The Rector of the Dependency, Archimandrite Philip (Vasiltsev), Hieromonk Simeon Minchev, and Priest Andrei Tregubov concelebrated with the Metropolitan.

After communion Priest Andrei Tregubov gave a sermon on the Sunday Gospel.

On this memorable occasion a thanksgiving service was celebrated after the Divine Liturgy.

With the blessing of His Holiness Patriarch Kirill, Archimandrite Philip presented members of the community of the Patriarchal Dependency with Patriarchal awards.

On the 60th anniversary of the Russian Orthodox Church's representation in Sofia V.P. Garistov was awarded the order of Saint Sergius of Radonezh (III class), and a longstanding worker of the Church O.I. Chonkova, the principal of the Sunday school N.I. Zhivkova, and the Dependency’s press-secretary I.N. Alexeeva, were awarded orders of the holy Princess Olga, Equal-to-the-Apostles (III class). A number of parishioners were given Patriarchal certificates of gratitude.

On the decision of the organizing committee of the celebration of the 135th anniversary of the liberation of Bulgaria from the Ottoman yoke, the chairman of the public forum “Bulgaria-Russia’, Svetlana Sharenkova, awarded Metropolitan Dometian of Vidin, Archimandrite Philip (Vasiltsev) and the Dependency secretary, Hieromonk Zotik (Gayevsky), the Samara Cross.

That day the Divine Liturgy in the Church of the Great-Martyr Panteleimon, which is attached to the Dependency, was served by Hieromonk Zotik (Gayevsky). Archpriest Nikolai Neshkov concelebrated. With the blessing of the Rector, Hieromonk Zotik gave Patriarchal certificates to the Church's choir director L.V. Baleva-Yordanova and L.A. Velinova. (Report from the press service of the Church’s Foreign Relations Department).