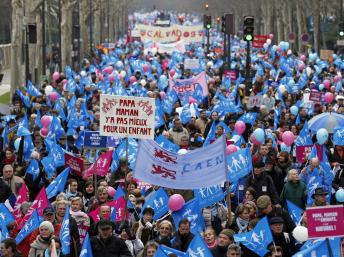 Same-sex unions have continued to be legalized in Europe. Recently, respective bills have been approved by the lower chambers of the French and British parliaments. It was done not only in defiance of the opinion of a part of deputies but also against the background of mass protest manifestations of citizens.

These legislative steps show that a revolution is taking place in the European societies’ understanding of marriage as such. The legal recognition of homosexual unions and their equating to marriage is a revolution is the sphere of legislative norms regulating family relations including the norms concerning taxation, education, healthcare, upbringing of children, etc.

The legalization of same-sex unions is another step towards an attempt to give an absolutely new meaning to marriage and the family directly opposite to the Christian one. Basically, this process involves connivance at individualism and hedonism on the scale of society and state and ultimately on the scale of the whole humanity.

In the countries which have embarked on the path of a radical revision of traditional family ethics, this process has resulted in a demographic crisis which is growing from year to year. The revision of fundamental norms of family law on which the human community has been built for centuries and which are preserved as before in the moral code of major world religions is a path leading to the self-liquidation of whole nations.

The legislative norm allowing homosexual unions to adopt and raise children appear especially dangerous. Evidently, these children will develop a view of parents, family and moral and social values completely different from the traditional ones. All this will contribute to further obliteration of differences between the sexes and subsequently to forcing out from public conscience the image of woman as mother, wife and guardian of the household. The final rejection of the idea that man and woman have special vocations and complement each other in family life threatens with destructive consequences for both the individual and society.

The Russian Orthodox Church preserves and defends the primary Christian understanding of marriage and family, sanctifies marital relations in the church Sacrament and asserts the importance of marriage for the wellbeing and development of society as a whole.

Our Church expresses her solidarity with Christians, adherents to other religions and those proponents of non-religious worldviews who have preserved the traditional understanding of marriage as union of man and woman and come out against the attempts to use a radical legal reform to impose on the whole society a different understanding of marriage unprecedented in human history.

Aware of the danger of these processes, we believe it important to develop dialogue with all the public forces, both religious and non-religious, who support the traditional ideas of family values. This criterion is one of the most important ones in the Russian Orthodox Church’s choice of partners in inter-Christian and interreligious dialogues.