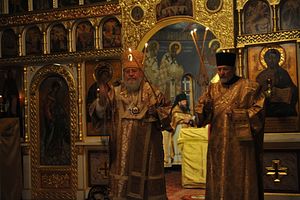 As reported by the official website of Holy Trinity Monastery in Jordanville, NY, His Eminence Metropolitan Hilarion of Eastern America and New York, First Hierarch of the Russian Orthodox Church Outside of Russia, celebrated Divine Liturgy at its cathedral on Saturday March 16, 2013, the feast day of All the Venerable Fathers. He was joined by Archimandrite Luke (Murianka), Abbot of the monastery, as well as other monastic and visiting clergymen. The Kursk-Root Icon of the Mother of God “of the Sign” was brought from New York City for the occasion by its caretaker, Priest Nicholas Olhovsky. Subdeacon Peter Markevich, a student of Holy Trinity Seminary, read a sermon before Holy Communion. 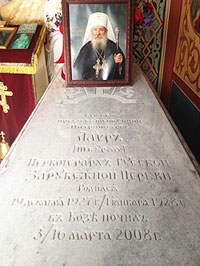 Afterwards, His Eminence led a pannikhida at which Metropolitan Laurus of blessed memory was commemorated, who had died five years earlier, and addressed the brethren with a sermon on the former Primate of the Russian Church Abroad.

On the day before, Metropolitan Hilarion hosted a discussion with the brethren on monastic life, its joys and difficulties, and shared his recollections of deceased monks of Holy Trinity Monastery, many of whom, in the opinion of His Eminence, attained holiness there.

Photographs of the divine services and the meeting of the First Hierarch with the brethren can be viewed here.