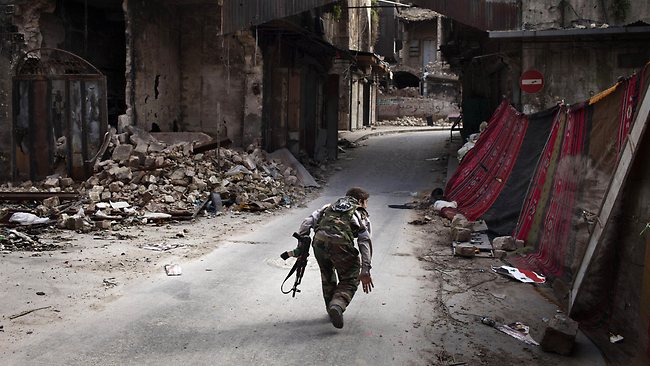 A Syrian rebel crosses a street while trying to dodge sniper fire in the old city of Aleppo in northern Syria on March 11. Picture: AFP
SOURCE: News.com.au

The Dutch government has raised its terror threat amid concerns that Dutch citizens travelling to Syria to fight in the civil war could return battle-hardened, traumatised and further radicalised.

The government cited the threat posed by jihad fighters returning from Syria, where rebels are battling government forces, and signs of increasing radicalisation among Dutch youth as key reasons for lifting its threat level from "limited" to "substantial". The level now is the second-highest on the four-step scale, just below "critical."

"The chance of an attack in the Netherlands or against Dutch interests abroad has risen," the country's National Coordinator for Security and Counterterrorism said in a statement.

The warning comes just two months before hundreds of thousands of people are expected to descend on Amsterdam for mass celebrations around the abdication of Queen Beatrix and coronation of her son, Crown Prince Willem-Alexander.

Counter-terror chief Dick Schoof said nearly 100 people had travelled from the Netherlands to Africa and the Middle East, mainly to Syria, to fight, and warned that it is not just a Dutch problem.

"These jihadist travellers can return to the Netherlands highly radicalized, traumatised and with a strong desire to commit violence, thus posing a significant threat to this country," Mr Schoof said in his statement.

He said that several fighters have already returned to the Netherlands and are being monitored. 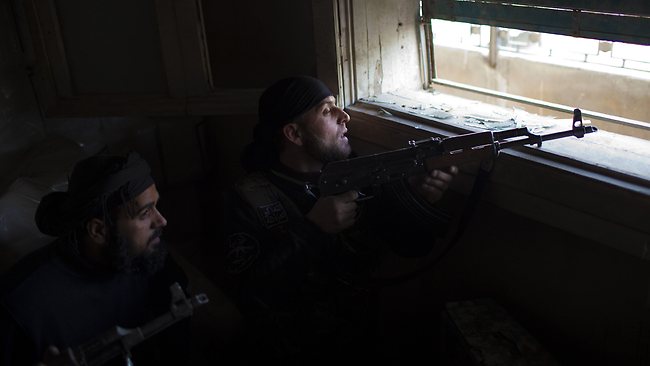 Syrian rebels take position as they monitor the movement of regime forces in the old city of Aleppo in northern Syria on March 11. Picture: AFP
Government terror experts also say that political upheavals in North Africa and the Mideast are giving terror networks room to grow.

Mr Schoof said Dutch intelligence and law enforcement agencies are working with other European allies to contain the threat. More intelligence staff are monitoring "jihadist travellers" and police are stepping up efforts to tackle radicalisation in Dutch towns and cities.

Last month, France also expressed concerns about its citizens heading to Mali to join radical Islamic fighters there, even as the French army was fighting the Muslim rebels in its former colony.

Germany's Interior Ministry said that in 2012, some 220 people from across Europe went to Syria to fight. Of those, fewer than 10 were from Germany. The majority of German "jihadi travellers" picked Egypt as their first destination in 2012, and then travelled on either to Mali, Syria or Yemen, according to German intelligence information.