Initial I: A Martyr Saint. Cutting from an antiphonal, Lippo Vanni, about 1350–75
An exhibition of medieval manuscripts and books from the collection of the famous English collector, patron, thinker and arts theorist, John Ruskin, is taking place in the J. Paul Getty's Museum in California. Sedmitza.ru reports on this event.

According to the museum's website, the exposition "Untold stories: preservation and transformation of manuscripts of medieval period" contains a huge number of manuscripts and printings, as well as illustrations, engravings and fragments of missals, prayer-books, Lives of Saints, historical and other works of the 14th to the early 17th centuries.

Stands and electronic displays tell the history of specific manuscripts or books: the circumstances surrounding their creation, correction, Church and secular use. A number of manuscripts could well have become objects of a detective novel: once they were saved from fires caused by wars, stolen or taken as trophies and brought thousands kilometers away from their original locations.

Engravings were often cut out from manuscripts, designed, hung on the wall, placed into albums of connoisseurs of arts; they were used as fully independent works of art and collecting.

Quite often they lost their value in eyes of their owners. Thus, in records of 1540, one English scribe complained that "cut pieces of pages of ancient leather manuscripts were used as rags for cleaning footwear and candlesticks, as fragments of greaseproof wallpapers, and so on". 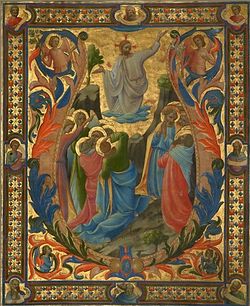 Initial V. The Ascension. Lorenzo Monaco, 1410.
Specifically, the illustrated Bible, produced in the Marmoutier Abbey in the 800s and later cut into pieces, was used for design of backs of first printed books in the 15th century.

Early in the 19th century, under the influence of romantism, interest in the medieval period began to grow and it provided the impulse for extensive academic research of medieval manuscripts. Thanks to scholarly efforts, many illustrations and manuscripts have been restored in their original form.

Within the framework of the exhibition, several public lectures were held on the themes of the exposition. Also, a symposium is planned which will be devoted to fate of medieval manuscripts in the 19th and 20th centuries.

According to the Museum website, another illuminated manuscript collection will be exhibited next year, higlighting the Christian East. "East Meets West: Byzantine Illumination at the Cultural Crossroads" will be on display from March 25–June 22, 2014.