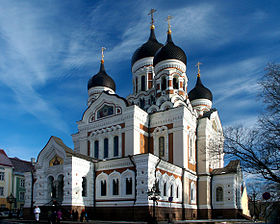 There are more Orthodox Christians than representatives of other religions among residents of Estonia aged 15 and above. 16% of Estonia's population call themselves Orthodox, reports Interfax Religion.

According to the 2011 population and living space census, 10% of the Estonian population consider themselves Lutherans, reported the Department of Statistics on Monday.

In 2011 there were followers of 90 different religious movements in Estonia. The number of those who refused to answer the questions about religion rose to 14% in comparison with the year 2000.

51% of Belarusians, 50% of Ukrainians, 47% of Russians and 41% of Armenians currently living in Estonia referred to Orthodox Christianity as their religion. 14% of Estonians, 27% of Finns, 15% of Germans and 14% of Latvians consider themselves Lutherans. 47% of Poles and 33% of Lithuanians in Estonia consider themselves Catholics.