Jurisdictional disagreement between the Patriarchates of Antioch and Jerusalem arises 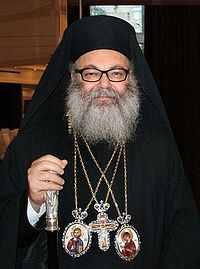 Patriarch John X (Yazigi) of Antioch and All The East
According to the Greek Church news agencies Amen and Romfea, the Patriarchate of Antioch has expressed its protest in connection with the election on May 4, 2013 of Archimandrite Makarios as Archbishop of Qatar by the Holy Synod of the Orthodox Church of Jerusalem, reports Sedmitza.ru. The Patriarchate of Antioch considers that Qatar together with other Arab countries of the Persian gulf are included in its jurisdiction.

As said in the protest of the Patriarchate of Antioch, "This decision causes a deep wound in brotherly relations between the Churches of Antioch and Jerusalem. This action has been made in a critical period currently experienced by Churches in the Middle East which threatens the very existence of Christians in this region".

In reply, the Patriarchate of Jerusalem stated that as early as in 1996 the late Patriarch Diodoros had appointed his representative, the present-day Patriarch Theophilos III, to Qatar where he founded the first Orthodox Church of Holy Great-Martyr George the Victorious and St. Isaac the Syrian, that this caused no reaction from the Orthodox Church of Antioch at the time, and that he hopes this misunderstanding between two sister Churches will be settled.

Moreover, according to the journalists, Patriarch Theophilos made a pastoral trip to Qatar in 2010 and served Divine Liturgy there in the newly-built church.