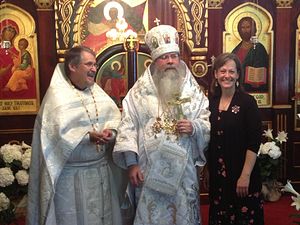 Father David and Matushka Rozanne Rucker have been mission specialists for many years with the Orthodox Christian Mission Center (OCMC), which has missionaries around the world under the umbrella of the Assembly of Bishops. Guatemala has seen an explosive growth of Orthodox Christianity among thousands of indigenous Mayans, so now the Ruckers will be going there to live, to train catechists and clergy and to help establish the first Orthodox seminary.

While Father David spends much of his life on the road, he is a priest of the Orthodox Church in America and is formally attached to Saint Sergius Chapel here in Syosset. Last weekend the Ruckers were here to meet with Metropolitan Tikhon. Father David served the Divine Liturgy with His Beatitude and was awarded a gold cross for his years of service.

You need to know that OCMC missionaries have to raise their own funds for their work. Incredibly, there are scores of faithful Orthodox missionaries like the Ruckers who take up this life and do this willingly and joyfully. Please consider helping them. You can learn more about Father David and Matushka Rozanne and donate through the Orthodox Christian Missions Center here.