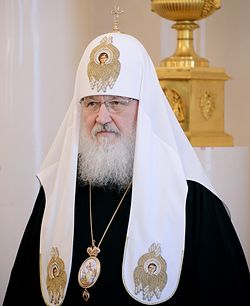 Speaking at the receipt on the occasion of the feast of Easter, his Holiness Patriarch Kirill of Moscow and all Russia stated that violence of Christians' rights worldwide has become systematic, varying from direct physical violence in Syria and other countries to prohibition of Christian symbols and exclusion of Christian presence to the margins of social life throughout the World.

"Today the World community is experiencing not a very good time. Celebrating the feast of Christ's Resurrection solemnly, we must not forget that many of our brothers and sisters in Christ have not been able to join us in this universal joy because every day they are becoming victims of violence and aggression from militant extremists," said Patriarch Kirill in his speech during the Paschal reception in the Foreign Affairs Ministry.

"In spite of all efforts, the Syrian Hierarchs: Orthodox Metropolitan Paul of Aleppo and Alexandretta and Syriac Metropolitan Mar Grigorios Yohanna Ibrahim who were kidnapped on April 24 this year, are still in the hands of militants," he added.

According to Patriarch Kirill, the number of acts of violence against Christians of Nigeria, Somalia, Sudan and a number of other countries has considerably increased for last year; in Egypt and Libya, radicals’ oppression against the Christian minority has also forced minority representatives leave their homes; but the most acute situation is forming today in Syria.

"Today's news of persecutions of Christians is received with sorrow of heart. Violations of Christians' rights have obtained various forms: from direct violence to prohibition of Christian symbols and pushing the Christian presence to the margins of social life," stressed the Patriarch.

"At this difficult time we are calling on all the world community not to remain indifferent to this lawlessness. It is necessary to apply all efforts in order to stop the bloodshed immediately, to maintain open public dialogue aimed at protection of peace and stability, to prevent terrorist threats and religious discriminations," concluded Patriarch Kirill.

In his greeting speech, the Minister of Russian Foreign Affairs S.V. Lavrov has noted that answers to these challenges have to be found through the collective actions of the world community to create a foundation of values.

"I feel certain that attempts to create such a foundation relying only on one scale of values, including values of secular culture, is a path to deadlock. Now wide-spread militant secularism, which in fact claims to replace religion in society and which is moving forward with messianic persistence, is striving to impose its own views upon all mankind. Neglect of man’s moral nature, and preaching of hedonism lead to consequences that can be characterized as catastrophic," said Sergei Lavrov.