Apostles Bartholomew and Barnabas commemorated in Constantinople and on Cyprus 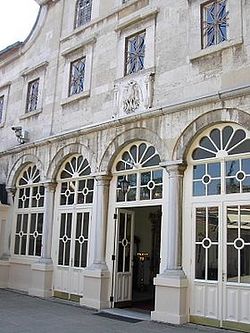 Church of St George
On June 11, Orthodox Churches that celebrate services according to the new calendar, commemorated Holy Apostles Bartholomew and Barnabas, report the Amen and Romphea agencies.

Patriarch Bartholomew of Constantinople celebratув his name day served a Divine Liturgy in the Cathedral of Great-Martyr George the Victory-Bearer at the Phanar. 30 Metropolitans of the Patriarchate of Constantinople concelebrated him. Representatives of other Orthodox Churches and of the Greek government as well as numerous pilgrims were present at the service. Metropolitan Constantine of Nicea, Metropolitan Theodosy of Tambov--from his Holiness Patriarch Kirill of Moscow and all Russia, and Bishop Irenej of Backa--from Patriarch Irenej of Serbia gave congratulatory speeches after the Liturgy.

The commemoration of Apostles Bartholomew and Barnabas on Cyprus is particularly solemn as Apostle Barnabas is the founder of the Orthodox Church of Cyprus.

Archbishop Chrysostomos II of Cyprus served a solemn Liturgy in the Stю Barnabas Cathedral in Nicosia and Metropolitan Basil of Constantia-Famagusta served a Liturgy in the ancient St Barnabas Monastery on the territory occupied by Turkey. Apostle Barnabas was buried in the first century on the very site where the Monastery is situated. Late in the fifth century his relics were found by Archbishop Anthemius of Cyprus and shown to the Byzantine emperor Zino as the evidence of the autocephaly of the Orthodox Church of Cyprus.