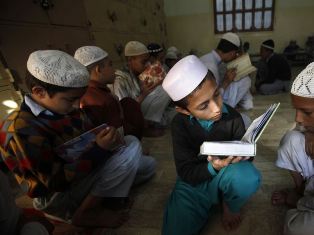 The activity of underground religious schools whose pupils had been earlier kidnapped from their parents has been exposed in Tajikistan, reported the press service of the republic's Ministry of Internal Affairs on Monday, reports Sedmitza.ru.

Two schools have been found in all—in Hisor and Shahrinav districts—in 20 and 40 kilometers from Dushanbe respectively.

According to the press service's message: "The workers of the Ministry of Internal Affairs were put on the track of illegal house Madrasahs by 48-year-old resident of the Shahrinav district, Abdusalom Radjabov who was lately detained on suspicion of kidnapping children."

On June 9, a 5-year-old boy disappeared in Dushanbe. According to eyewitnesses, the child had been taken away from his yard by an unknown man. Kidnapping and disappearance of children is an extremely rare thing in Tajikistan, and such incidents evoke a large response from the populace.

In his testimony, the detainee confessed that he had kidnapped children for their further training in illegal religious schools in his home. In the course of investigation, the testimony of A. Radjabov was completely confirmed.

The Ministry of Internal Affairs workers unexpectedly came to a home, where the missing boy from Dushanbe was found together with nine other children from different regions of the republic. The Internal Affairs Ministry notes that many children were from poor families and their parents even did not report their disappearance to the police.

"The detained ‘clerics’ were teaching religion to a group of children in unsanitary conditions, without a permit—that is, illegally—at the same time unlawfully holding them captive. Prior to this they had committed another felony—kidnapping them," reports the Internal Affairs Ministry.

Criminal case proceedings have been initiated; the "cleric-teachers" have been detained.

The population of Tajikistan is 8 million people. About 99% are Muslims, the majority of them being followers of the Hanafi school of the Sunni branch of Islam. The experts note that the role of Islam is growing in the republic every year and a greater number of residents are becoming followers of more radical movements of Islam. In 2012, 150 people were convicted of religious extremism.