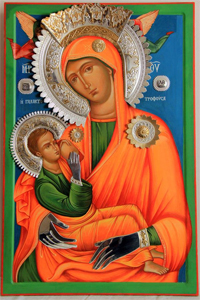 On June 23, the feast of Holy Trinity, a copy of the wonder-working icon of the Mother of God “The Milk-Giver” was given to the Alexander Nevsky Lavra. Cross processions with this icon were held in many Monasteries and Convents of Serbia, Jerusalem and Mt. Athos. It was blessed by the head of the Serbian Orthodox Church Patriarch Irenej and the head of the Church of Jerusalem Patriarch Theophilos III. The delegation of the Serbian Orthodox Church headed by Bishop Ioanniky of Budimlija and Nikshich came to St. Petersburg for the conferral of the icon, reports Blagovest info.

The Most Holy Virgin breast-feeding the Christ Child, is depicted on the “Milk-Giver” icon of the Mother of God. This rare icon was originally in the Lavra of St. Sabbas the Sanctified near Jerusalem.

The founder of the Lavra, on his death-bed predicted that after many years a royal pilgrim from Serbia with the same name as his would visit his Lavra and asked that the wonder-working icon of the Most Holy Theotokos the “Milk-Giver” be given to him as a blessing.

Six centuries later, the only Lavra situated in the East was visited by St. Sabbas, Archbishop of Serbia—son of a Serbian ruler. The monastery's brethren, remembering the prophecy, gave him the icon. On his way back to Serbia, St. Sabbas visited the Mt. Athos Chilandar Monastery, which he had founded. He gave the icon of the “Milk-Giver” icon of the Mother of God to this monastery and it is kept there to this day.

Bishop Nazary of Kronstadt, the Abbot of the Holy Trinity-Alexander Nevsky Lavra, talked about the significance of this icon for the Orthodox Church. "The very idea of giving the icon, blessed in all Serbian monasteries, came from the photographer Miodrag Brankovich. We met each other as if by chance: several years ago he wished to arrange an exhibition in St. Petersburg and came to the Lavra. Now I realize that that meeting was providential. He was very impressed by our city and the Alexander Nevsky Lavra. He returned again and again, and with our help travelled much over Russia. During one of his visits an idea occurred to give a gift to the Lavra for its 300th anniversary—a gift not from a single person but from all the Serbian people.

At the present time, the icon has already covered 10,000 kilometers—a distance that not every pilgrim could cover in a lifetime. We have an idea to create a book about the path of this icon from Serbia to Russia, because this icon already has its own history".

The icon has been placed in the Holy Trinity Cathedral of the Alexander Nevsky Lavra for veneration by the faithful. According to Bishop Nazary, in the future it will be placed in the gateway Church of the Lavra after its restoration has been completed.