Archival documents of St. Thaddeus Monastery in Iran to be published for the first time 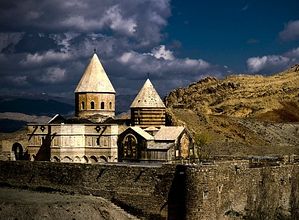 Archival documents of St. Tade Monastery (named in honor of Apostle Thaddeus, in Armenian, Tadevos) in the Iranian district of Artaz near the town of Maku, a UNESCO World Heritage site, will be published for the first time. Earlier the monastery was also the center of the Diocese of the Armenian Apostolic Church in Atropatena, reports Blagovest Info.

Most of the documents are the correspondence addressed to the head of the Armenian Church in Iran at that time, Archbishop Nerses Melik-Tangian (ruled from 1913 till 1948). In their letters the deputies—Armenians, elders from different settlements, address the Archbishop, seeking his advice and direction. The letters from the archive also reveal conflict situations on various issues between the Diocese of Atropatena, the sardar (a judge, an influential high official, or ruler is called "sardar" in Iran) of the Iranian town of Maku (in ancient times the Maku district was part of Media) and villagers.

Every year in July a great number of Armenians make a pilgrimage to St. Tade Monastery. This year it is scheduled for July 4-6.

The Armenian Apostolic Church is an anti-Chalcedonian, Oriental Orthodox Church and claims to trace its origins to the missions of Apostles Bartholomew and Thaddeus in the 1st century.