Gay ‘marriage’ a ‘sign of the apocalypse’: Russian Patriarch 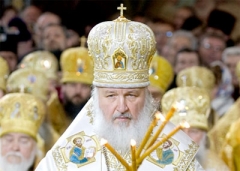 In his Sunday sermon this weekend in Kazan Cathedral in Moscow, Patriarch Kirill, Primate, of the Russian Orthodox Church, warned against the extraordinary rise in many western countries of the homosexualist movement. Kirill said that the trend of legalizing “gay marriage” is “a very dangerous sign of the apocalypse.”

It “means people are choosing a path of self-destruction,” he said. He said he supports the recently passed national ban on homosexualist propaganda that has prohibited the Gay Pride festivities that have become a prominent feature of national life elsewhere.

“Lately, we have enormous temptations, when a number of countries opting for sin is approved and justified by the law, and those who, acting in good conscience, are struggling with such laws imposed by a minority, being repressed,” Kirill said.

He added that everything must be done to prevent the approval of sin “on the spaces of Holy Russia.” Otherwise, “the people are embarking on the path of self-destruction”.

The sermon came the Sunday following the passage in Britain of the Cameron government’s so-called “equal marriage” bill. Religious leaders and democracy campaigners both strenuously warned the government that its passage would seriously threaten foundational democratic freedoms.

Even the most perfect laws, however, cannot eradicate corruption, lies, evil and confrontation, he said: “These can be eradicated only by the person who has made a free choice in favor of the good.”

In recent months, Kirill’s has emerged as the strongest and most uncompromising religious voice in Europe against the apparently unstoppable political juggernaut of the international homosexualist movement. His comments yesterday follow his warning at a meeting in Moscow in May this year with Secretary General of the Council of Europe, Thorbjorn Jagland, where he said, “Today we have a very dangerous development, the laws regarding same-sex marriages and adoption of their children which go against the moral nature of man.”

“If people choose this lifestyle,” the Polish news service Interfax quoted him saying, “it is their right, but the responsibility of the Church is to say that it is a sin before God”.

What the Russian Orthodox Church is concerned about, Kirill said, “is not the fact of the existence of this sin - it has always existed. But we are deeply concerned that for the first time in the history of the human race sin is being justified by law. This opens up the prospect of a dangerous development, which will contribute to the moral degradation of society.”