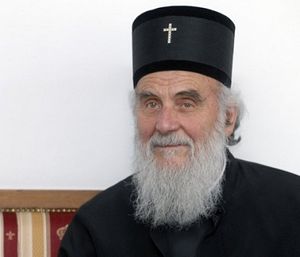 Serbian Orthodox Church (SPC) Patriarch Irinej said at the end of his visit to St. Petersburg and Moscow that Serbia is not running away from Europe, but cannot join Europe as it is now under the conditions that are being imposed on it.

"We do not have the right to renounce our spirituality, our culture, everything that makes us a nation. This is why I hope the people will consciously gather around the Church and thank God for giving us a chance to preserve the apostolic faith," the Patriarch said in an interview for the Voice of Russia, expressing hope Serbia will become stronger over time, both in the spiritual and the political sense.

Asked if Serbia can keep its Orthodox roots once it joins the EU, Patriarch Irinej said "the present spiritual state of Europe is pathetic."

"Like Nietzsche said 'God is dead' there. Still, a few little islands of church life remain," he said.

The Patriarch, who spent two weeks in Russia, said he is especially happy to have taken part in the festivities marking the 1,025 years since the adoption of Eastern Orthodox Christian faith by Kievan Rus.

"From a Christian aspect, we got a very positive view of Russia," he said.

According to the Patriarch, Russia has changed a great deal since he, then a Bishop of Nis, attended the funeral of Patriarch Pimen of Moscow and all Russia in 1990.

"It is a completely different country now. It has risen, it has many churches and monasteries, and the people stand with their Church," said Irinej.

"They were wonderful in the past and they continue to be so in the modern age. We all remember that many Russians fleeing the October Revolution came to Serbia, where they were welcomed like brothers. These were not just people who served the church, but also scientists and philosophers. They were laymen, but very close to the church," said the Patriarch.

He added that "His Holiness (Russian) Patriarch Kirill knows our Church well, and what is even more important, knows the situation in Kosovo."