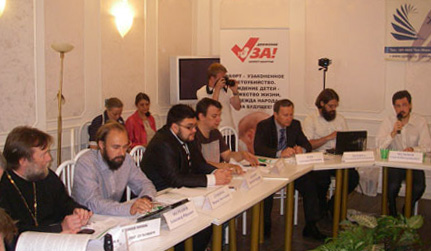 A bill banning abortions in Russia was discussed on August 12 at the round table in the Central Hоuse of Journalists. The discussion was arranged by the organizers of the "Pro-life" international festival; activists from other Orthodox, public, parents' organizations and political parties who share the "Pro-life" movement's values took part in the discussion, reports Blagovest-info.

The bill was developed in implementation of decisions of the fourth International festival of social technologies in defense of family values--"Pro-life 2013" that took place on July 8-10 in Moscow. The authors of the bill are proposing to make changes in the federal law of the Russian Federation "On Fundamentals of Health Care of Citizens in the Russian Federation" and the Penal Code of the Russian Federation, to adjust the Russian legislation in accordance with international regulations, specifically, with the UN "Convention on the Rights of the Child". The legislative amendments are aimed at protecting human life, beginning the moment of conception. The proposed law states there is a necessity for "documentary registration of conception" by a medical organization.

The bill introduces a ban on induced abortion except in special cases when the life of a mother is under threat. The sanction for unlawful induced abortions is imprisonment (up to 5 years) or compulsory labor or restrictions on professional activity: for the would-be mother and those who obliged her to make an abortion, and those who operated on her unlawfully. The authors of the bill equate a pharmaceutical abortion to a surgical abortion: a woman taking an abortive pill or using a contraceptive device is subject to imprisonment as well as those who produce, keep and sell abortive pharmaceuticals.