What makes a young middle-class man turn to Islam and want to risk "martyrdom" in Syria? A French father, who has just been bereaved, tells the BBC's Christian Fraser what happened to his sons. 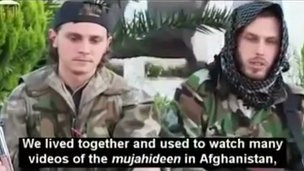 Nicolas and brother Jean Daniel, French Muslim converts fighting in Syria
The jihadist video is familiar in both style and content. In front of the black flag proclaiming allegiance to Allah, is a man who calls himself Abu Abd Al-Rahman.

"I am French," he says. "My parents are atheists; they do not subscribe to any religion."

In fact his parents were baptised Catholic - as was he - and they know him as Nicolas. He is a 30-year-old convert. He comes from a middle-class background in Toulouse. His mother works for the army.

In the second half of the video, Nicolas appears in military fatigues, a Kalashnikov rifle across his legs.

There is a man sitting to his right. He looks less certain. There is no beard. It is his younger half-brother, Jean Daniel, who went with him in Syria to wage jihad.

Nicolas found Islam through the internet in 2009.

The main mosque he attended in Toulouse is a moderate one. But his Muslim friend, who wished to stay anonymous, told me he and Nicolas had talked many times about Islam - until something suddenly changed.

"I don't know who radicalised Nicolas," he said. "I wouldn't be able to recognise them. They came from outside. Not from the mosque or our estate.

"They were from Strasbourg, or perhaps Paris. Certainly not from Toulouse, that's for sure. They didn't stay for long. Some were shoved out."

On 29 March the men took a bus to Barcelona. From there they flew to Casablanca and on to Istanbul. From Turkey they crossed the border for the Syrian city of Aleppo. They had been working part-time to fund their travel, though their friend is not convinced that Jean Daniel was as motivated as his brother.

"I am sure he regrets the decision to go," he said. "It's Nicolas who influenced him. He must be wondering what he's got himself into. He listened too much to his brother."

The two men were regular visitors to the Izards, a notorious crime-ridden estate in the northern outskirts of the city. Nicolas had been convicted for selling hashish. His family says he was mixing with the wrong sort.

But then he found his new faith. He was more observant, stricter, in his adherence to the religion than many of his Muslim friends. And he tried to convert everyone in his family.

In 2011 he succeeded in converting his brother. His mother was so concerned by his developing behaviour she called the French intelligence service.

The boys are from broken but loving homes. There is no suggestion they were unhappy. Their father, Gerard, who now lives in French Guiana, agreed to an interview on Skype.

"In their methods they're more like a cult than a religion," he said. 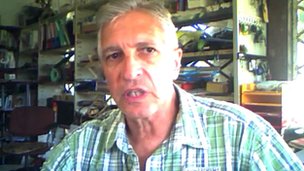 Gerard, father of French Muslim converts
"Nicolas' computer was full of YouTube videos of the fighting in Afghanistan.

"To start with he met someone, someone who showed him the videos. I think the films really do influence these boys... They can take hold of people.

"I raised my children on Nintendo and Coco Pops - to see them in Syria doing this is pretty distressing. I think the men who did this target people who are weak. Nicolas was searching for work, for an identity - perhaps that's why they succeeded.

"Of course I am worried about them. I hadn't heard from the boys in 19 days until Monday, when Jean Daniel called to say they were OK. They'd been fighting in a battle for the airport - they were victorious."

But an hour after our interview Gerard took a phone call from Nicolas in Aleppo - Jean Daniel had been killed.

Intelligence sources believe there are some 220 French men who have gone to fight in Syria so far. It is estimated that 40 of them are converts. At 15-20% they are a disproportionate number. (Only 1% of Muslims in France are converts.)

Mathieu Guidere, an expert on Islam and the call to jihad, is an adviser to the French government.

"These type of people they consider the West is the way it is. You can protest but nothing changes whereas, at the same time, you have demonstrations in Egypt that do usher in change. It's this clash of perceptions that is creating a lot of the problems today.

"Now Islam appears like, let's say, communism in the 60s and the 70s. It more like an ideology than a religion for the men we are talking about." 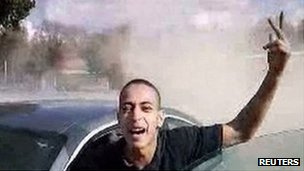 There are fears that others may follow in the footsteps of Mohamed Merah
The interior minister, Manuel Valls, calls it a ticking time-bomb. He points to the example of Mohamed Merah, who trained in Islamist camps in Afghanistan and returned to kill seven people. He, too, circulated within the Izards estate.

I asked Mathieu Guidere whether he believed there were networks in France that were radicalising young Muslims.

"There is no evidence that there are cells or networks that are structuring this. Nicolas and Jean Daniel travelled on low cost airlines. It is internet-inspired. Almost all the cases we have - almost all of them - are internet converts.

"It is the images that have the impact. They don't even read Arabic. They don't understand what's going on in the videos but the impact of some images, some videos leaves them totally traumatised. They can't ignore it - they feel an overwhelming urge to do something."

Gerard hopes his family's experience serves as a warning to other parents. He is a loving father but he cannot be absolutely sure what his surviving son is now capable of.