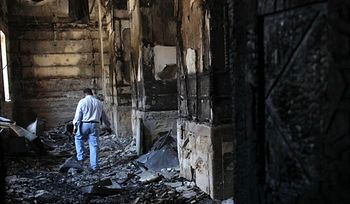 With at least 20 attacks against churches, Christian schools and orphanages, Minya Governorate is the part of Egypt where Islamists struck with greatest violence and brutality.

"The Islamists", one resident said, "burnt and destroyed everything. Their goal was to erase all the traces of a Christian presence; even the orphanages were looted and destroyed."

They stole church offerings, clothes, and children's games before torching the entire building. The fire lasted over 5 hours.

"Fortunately," the source said, "the children were taken to safety before the arrival of the Islamists."

Like other Christians sites, the two homes that housed hundreds of orphans are now a pile of rubble.

The criminals did not only destroy the two orphanages but also the homes of some families working for the orphanages as well as a nearby art gallery that sold objects and artefacts made by orphans to raise money.

Shurkri Huzayn, 40, is the orphanage guard. He, too, grew up as an orphan at the facility. He witnessed the Salafist attack.

"What kind of people are they? Even unbelievers would not attack an orphanage," he said.

Islamists raged particularly against anything that symbolised the Christianity and modernity, including computers.

After they left the building, the terrorists burnt nearby shops and schools, such as the St Joseph Coptic School, which is run by nuns, a pharmacy and a restaurant. Anti-Christian graffiti were sprayed on the walls along a road.

A few days after the massacre, the guard said that Copts wrote a message on the wall of the orphanage in response to the militants' insults that read, "Despite of what you did, we ask God to forgive you," and "God exists."

According to a teacher at St Joseph, the attack will have a major impact on Christians' daily life.

"The teachers," she noted, "do not know when the school year will start. The school is open to Christians and Muslims and has taught hundreds of children from rural areas, many of whom were housed in the two orphanages."