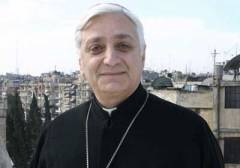 The Syrian Chaldean Catholic bishop of Aleppo, Antoine Audo, warned of a possible "world war" if the West intervenes in Syria
Pope Francis, as well as other Christian leaders in the Middle East and around Europe are sounding the alarm of a possible global conflict should the US and other western powers launch an attack on Syria.

In an interview with Vatican Radio yesterday, the Syrian Chaldean Catholic bishop of Aleppo, Antoine Audo, said that armed intervention in Syria could unleash a “world war.”

“If there is an armed intervention, that would mean, I believe, a world war. That risk has returned,” he said.

The comments follow an urgent appeal by Pope Francis this weekend for the world’s powers not to intervene in the escalating Syrian conflict. On Sunday, Pope Francis called on the international community to do everything they could to avoid military action, calling for them “to be more sensitive to this tragic situation and make every effort to help the beloved Syrian nation find a solution to a war that sows destruction and death.”

“The increase in violence in a war between brothers, with the proliferation of massacres and atrocities, that we all have been able to see in the terrible images of these days, leads me once again raise my voice that the clatter of arms may cease," he said during the Angelus. "It is not confrontation that offers hope to resolve problems, but rather the ability to meet and dialogue.”

Bishop Audo added to Vatican Radio, “We hope that the Pope’s call for real dialogue between the warring parties to find a solution can be a first step to stop the fighting.”

L’Osservatore Romano, the Vatican’s quasi-official paper, also criticised the threats by Western powers, accusing US President Obama of pursuing a policy of “political expediency” rather “than of substance.”

Britain, France and the US are widely reported to be preparing military strikes against Syria. They argue that credible reports of the government using chemical weapons against the Islamist rebels and civilians show the government has violated international peace treaties. The matter escalated rapidly last week when workers with the medical charity Medecins Sans Frontieres said three hospitals in the Damascus area had seen about 3,600 patients suffering from “neurotoxic symptoms,” of whom 355 had died.

The Syrian Civil War began in 2011 with uprisings in many Middle Eastern countries, largely motivated by conflict between the two main factions of Islam, Sunnis and Shias, that western media dubbed the “Arab Spring.” The Obama administration has backed the rebels, and US diplomatic hostility to the Shia Assad regime has escalated recently, despite warnings that rebels are funded and supported by the Sunni Islamic extremist group the Muslim Brotherhood, and ultimately Al-Qaeda. Reports have increased daily of attacks by rebel fighters against Christian Syrian civilians, their homes, schools and institutions.

While refugees, both Muslim and Christian continue to pour out of the country into refugee centres in Turkey, Jordan and Lebanon, Christian leaders around the world are calling on the Obama administration and the British government to recognise and oppose the threat to the remaining Christian population in Syria. Reports on the ground have said that the country has become a magnet for Islamic extremists, many from Europe, who are carrying out a violent pogrom against Christians.

The Syrian-born Patriarch Gregoire III Laham has echoed Bishop Audo’s warning of a “world war”. He told Catholic News Service by telephone today from the Patriarchate’s summer residence in Lebanon, “Enough with the intervention!”

“It is fueling hatred, fueling criminality, fueling inhumanity, fueling fundamentalism, terrorism -- all these things are the fruit of intervention. Enough!” He added, “Surely, it will spread like a world war.”

“The Holy Father was very clear on Aug. 25," the patriarch said. “This is the real voice to be heard, and not the voice of weapons and interventions and of warships.”

Laham, who is the Patriarch of the Melkite Catholics, (in canonical union with the See of Rome) of Antioch of the East, of Alexandria and Jerusalem, repeated the warning to AsiaNews, saying, “We must listen to the Pope’s appeal for peace … Syria needs stability.”

“If western countries want to create true democracy then they must build it on reconciliation, through dialogue between Christians and Muslims, not with weapons. This attacked being planned by the United States is a criminal act, which will only reap more victims, in addition to the tens of thousands of these two years of war. This will destroy the Arab world's trust in the West.”

The planned attack, he said, will affect the whole Syrian population, saying this outcome was no less serious than the use of chemical weapons. It will sink the area into total war, which, he said, the Islamists will win, reducing the country to small, constantly warring enclaves, and pushing the remaining Christians out.

“The disappearance of the Christians,” he said, “is a danger not only for Syria, but for all of Europe.” The presence of Christians in the Middle East, he called “the essential condition for a moderate Islam, which exists thanks to the Christians.”

“If we leave, there can be no democracy in Syria. This is supported also by the Muslims themselves, who fear the Islamist’s madness. Many say that they cannot live where there are no Christians.”

The Patriarch continued, asking, “What or who have led Syria to this thin red line, this point of no return? Who created this hell in which our people have been living for months?”

“Every day…Islamic extremists from all over the world are pouring into Syria with the sole intent to kill and not one country has done anything to stop them, even the U.S. has decided to send in more weapons.”

The calls for restraint from Catholic leaders was joined today by the Russian Orthodox Patriarchate. Metropolitan Hilarion of Volokolamsk, head of the Department for External Relations of the Moscow Patriarchate, accused the US, “as was the case in Iraq,” of “acting as an international executioner.” Hilarion told AsiaNews that the US is acting without the endorsement of the UN, adding, “They want to decide the fate of a whole country of millions of inhabitants.”

“Once again, thousands of lives will be sacrificed on the altar of an imaginary democracy.” Among these victims, he added, are “Christians, about whose fate no one cares.” These are at “risk of becoming hostages to the situation and the main victims of radical extremist forces, who, with the help of the United States, will come to power.”

The Russian government has also strongly opposed Western intervention. Tonight a statement from the Foreign Ministry said that US-led attacks would have “catastrophic consequences for other countries of the Middle East and North Africa”. The statement said the US is bypassing the UN Security Council, and creating “artificial groundless excuses for a military intervention”.

The Syrian government admitted in 2012 to having stockpiled both chemical and biological weapons, including VX, Sarin and mustard gas, claiming that they were for use only against foreign aggressors. The country is signatory to the 1925 Geneva Protocol which banned chemical weapons following the horrors of gas attacks in WWI.

Meanwhile, reports are rapidly escalating of Islamic attacks on Christian churches, schools and other institutions in Syria and other places in the Middle East, most notably in Egypt. The Associated Press reported that as of today, 638 people are confirmed dead, and nearly 4,000 injured in Egypt.