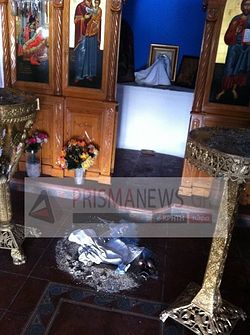 Photo: http://www.prismanews.gr
A shocking sight opened to the parishioners of a small Church in Ligaria (Iraklion region) on Crete, reports Sedmitza.ru.

At night, unidentified people (probably neo-pagans) forced the door, penetrated into the Church, desecrated the liturgical vessels and left graffiti of anti-Christian content on the walls. Judging by the content of the blasphemous slogans, it can be supposed that the vandals were neo-pagans: one line of graffiti expresses displeasure that "ancient Christians destroyed pagan temples". The forensic expert discovered ash in the centre of the church, so there is reason to suppose that “satanic rituals were conducted" there.

This event has sent shockwaves through the community of Crete, which has expressed indignation at the desecration of the Orthodox church.

It should be noted that neo-paganism in Greece (as well as in Russia and other European countries) has gained popularity over recent years. As a result, attacks on Christians and Christian Shrines have become more frequent.