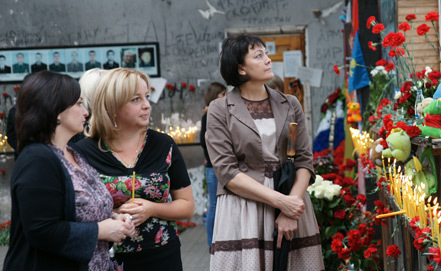 The "Mothers of Beslan" public organization has sent in an open letter to the president of the USA Barack Obama, in which it has called upon him not to launch a military strike against Syria, reported the head of this organization Susanna Dudieva to ITAR-TASS on September 4.

"This madness must be stopped, but not by a new violation or by a military invasion which will only aggravate the situation and bring more grief to the Syrian people. "Mothers of Beslan", who have just finished a three-day commemoration of the children killed during the terrorist attack in Beslan, are reminding the president of the USA that, first of all, children will suffer," said Dudieva.

"Any politician, while making a decision, must remember its consequences, and the pain of somebody else's child must be taken as the pain of his own child. We are calling to you: do not take a rash step!" written in the letter of the "Mothers of Beslan" to the president of the USA.

The letter also stresses that Obama can prove his right to The Nobel Peace Prize with which he was awarded only by a policy of peaceful settlement of the Syrian crisis.

During the attack on the School No. 1 in Beslan by terrorists on September 1–3, 2004, more than 1200 people were taken hostage. As a result of the terrorist act, 334 people were killed or died of injuries later; 186 of them were children. 126 former hostages became disabled, 70 of them are children, and many of them still need rehabilitation.