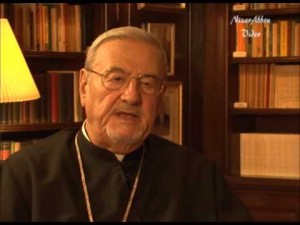 Beloved Hierarchs, Clergy and Faithful of our God-Protected Archdiocese:

Greetings to you and your families as we begin a new ecclesiastical year. I pray you had a pleasant summer. I write to you today as our president and United States Congress contemplate military action against Syria. As those of us with deep roots in that land already know, more bombs and destabilization of the country will only lead to further bloodshed and devastation. In my opinion, based on a lifetime of knowledge in that area of the world, it serves neither the interest of the United States, nor the Syrian people (or the people of the Middle East at large for that matter) to bomb and further destabilize the country. Extremists groups such as Al-Kaeda are waiting in the wings to prey on any weakness in the Syrian government and infrastructure. The results of such a bombing would be yet another step in the extermination of our Christian presence in the Middle East, a presence that dates to the dawn of Christianity. Our Church has already suffered greatly and has new martyrs waiting to be glorified –we do not need any more!

Therefore, I urge all of you during the next few days to contact your respective senators and congress people to urge them to vote NO to any unilateral military action by the United States. Time is of the essence so please distribute this email to everyone you know as quickly as possible and share this message on your Facebook and other mass media sites.

Wishing you all a peaceful new Church year, I remain, Your Father in Christ,