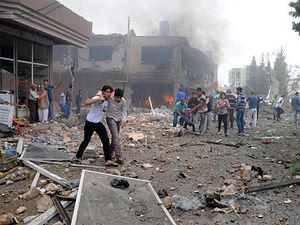 As President Barack Obama pushes to keep his military options open in Syria, we hear of many sides in that brutal war.

But one group is hardly mentioned.

Their houses of worship have been burned by Islamist rebels. Their clergy have been kidnapped. Their people have been killed.

And when radical Islamists take a village, the people say they are told they have three choices: renounce their faith, pay a tax or leave.

They are the Christians of Syria. And they've become refugees in their own land.

And if Assad's government falls, will the Christians be purged by Islamic fundamentalists, as happened after the fall of strong central governments recently in Egypt and Iraq?

"In Washington, there is a very disturbing indifference toward the Christians of Syria," said Nina Shea, director of the Center for Religious Freedom and senior fellow at the Hudson Institute.

"Our political leaders don't talk enough about them to make it an issue, and many of our American religious leaders find it inconvenient," she told me in an interview. "It's as if it is politically incorrect to talk of this problem. Orthodox Christians being attacked by radical Islamists, and few of our leaders are talking about what's happening to them."

Not all. Sen. Rand Paul, the Republican from Kentucky, has publicly raised the question of what happens to the Christians if Assad falls. But Paul is in the minority.

As are the Christians of Syria. A few years ago, they made up almost 10 percent of the Syrian population. They were protected — some say favored — by the regime of the murderous Assad. But now their number is around 3 percent, according to estimates by Shea and others.

The other day I met with several Syrian Christians at St. George Antiochian Orthodox Church in Cicero. I wanted to hear their stories.

"When they come into Christian villages that still speak the same Aramaic language spoken by Jesus Christ, the rebels scream, 'It is time for the crusaders to leave!'" said the Rev. Nicholas Dahdal. "And by crusaders, they mean Christians."

But don't they know that the Christians were there long before the crusaders arrived from Western Europe?

"No. They don't know over there, and people here (in America) don't know," said Dahdal. "And what worries me is that they don't want to know."

As an Orthodox Christian, I've always wondered about this all-but-willful indifference of the West, and I must admit I have had some difficulty dealing with it.

Is the blindness caused by the fact that there is no blue-eyed, blond-haired Jesus to be found in Syria?

The carpenter wasn't some lanky Anglo. He was swarthy, as are the people of the Middle East, and his followers in Syria and throughout the region worship as they have for centuries, from the earliest days of Christianity, from the time that St. Paul traveled on that road to Damascus.

The indifference of the West could be due to church politics. Or it could be that the mere mention of the Christians in Syria — and how they are under threat by some Islamist groups — further complicates the already confusing landscape there and weighs down the simple arguments for war.

I met with parishioners in a conference room at the beautiful Antiochian church. They are highly educated men and women, mostly Syrian-born physicians and academics.

They are not supportive of Assad's reported cruelty, such as the alleged chemical attacks. But they also want President Obama to know this:

"If the president drops missiles and destabilizes the government, the Christians left in Syria will be destroyed," said Marwan Baghdan. "They will have no protection. Our families are there. Our brothers and sisters. Our parents. And they're very scared."

Sausan Yazji spoke of Wadi al-Nasara (Valley of Christians), where many remaining Syrian Christians have gone to seek refuge.

"My uncle was 80 years old and was shot by a sniper in the stomach in his bed," she said. "Many people have come to Wadi al-Nasara. Entire families are crowded into one room. They're afraid to worship."

Gassan Mohama talked of his youth in Damascus years ago.

"Most of my friends are Muslims," he said. "We lived together as brothers. We played together and studied together. And some have turned to another way. And there is misery."

The ancient Syrian city of Maaloula, where Aramaic is still spoken, was taken by extremist Islamists the other day. The New York Times focused on the rebels' awareness of their "public relations problem."

"They filmed themselves talking politely with nuns, instructing fighters not to harm civilians or churches, and touring a monastery that appeared mostly intact," the Times reported

Obviously, you can find Syrian Christians who will paint a much different picture.

"There is a purification campaign and jihadist elements among the rebels who see Christianity as blasphemy," Shea told me. "History has shown what happens to Christians in the Middle East during times of chaos. It happened during the Armenian genocide, and most recently in Iraq and Egypt, with churches burned to the ground."

And now it is happening in Syria.

When a powerful nation like ours prepares for war, what is not in the news, what is not included in the rhetoric, can often be as telling as the large bold type in the official statements.

And among the pro-war elites in Washington, the plight of the Syrian Christians, and their brethren throughout the Middle East, is often pointedly forgotten, and pointedly ignored. Syrian Christians find sanctuary with Polish families
Magdalena Chudzicka, a mother of four, is rolling out her welcome mat. Her family is among dozens in Poland opening their homes to Syrian Christians fleeing war and Islamic State (IS) persecution, part of a ground-breaking drive by the Catholic nation's tiny Protestant community to save lives. Syria in Flames: Is This How to Defend Our Faith?

Syria in Flames: Is This How to Defend Our Faith?
Towns and villages in Syria that have been home to Christians for 2,100 years are being steadily emptied as families flee persecution, the deadly violence of a civil war, fears of chemical warfare and a rash of targeted kidnappings in which Christian leaders have been held for large ransoms.
×