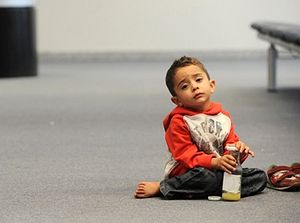 Photo: ITAR-TASS/EPA/WAEL HAMZEH
The Imperial Orthodox Palestine Society, which is the oldest public organization in Russia, "intends to continue giving humanitarian aid to the Syrian people no matter what circumstances which may arise in Syria", reports ITAR-TASS. This has been stated today at a press conference by its deputy chairwoman Elena Agapova.

Syria "now relies on Russia and our people," she said, stressing that the society intends "to extend its humanitarian activity, to bear the spirit of peacemaking to the Biblical region using public diplomacy as a means of mild force".

Since the beginning of this year, the Imperial Orthodox Society has sent humanitarian aid to Syria in the amount of 58.8 million rubles. This was reported today at the press conference by the chairman of the IOPS Moscow office Sergei Baidakov.

"Six batches of humanitarian aid were sent; they were given in equal parts to Patriarch of the Church of Antioch John X and Grand Mufti of Syria Ahmad Badreddin Hassoun for distribution among the needy, regardless of their faith," said Baidakov.

Another batch of humanitarian aid was transferred early in August to the central hospital for children in Damascus; it included medicaments, medical technical equipment, food, and other primary necessities.

Today the Imperial Orthodox Palestine Society has announced the beginning of fundraising for purchase and delivery of baby food to Syria. All those wishing to help can leave dry milk formulas in the Church of Holy Prophet Elijah in the Obydenny lane in Moscow or transmit monetary funds to the account of IOPS.