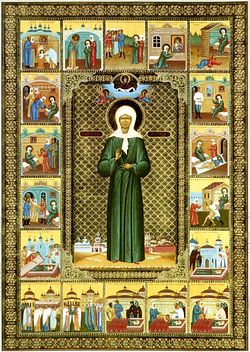 "Presently, a wooden house where the museum will be situated is being constructed. The new museum’s opening is scheduled for November 22--the saint's birthday," reported the regional government on Wednesday to Interfax.

The relics of St. Matrona are preserved at the Convent of Protection of the Mother of God in Moscow, reports Sedimita.ru.

St. Matrona was born in 1885 in Tula province. She was not only absolutely blind from birth--she had no eyes at all--but the girl had a gift of spiritual vision. According to her life, from her early years she could not only see all the sins and crimes of people, but also their thoughts. She felt when a danger was near, and foresaw natural and public disasters. Through her prayers people were healed of their diseases and consolation in their sorrows.

In 1925, Matrona moved to Moscow and lived there until the end of her life.

On May 2, 1952, the earthly life of St Matrona ended. Before her death, the saint said: "Everyone, come to me. Talk to me, as to one living, about your sorrows. I will see and hear you and I will help you".

In October 2004, at the Council of Bishops, St. Matrona was canonized for common veneration. Dnepropetrovsk region: tornado changed its direction before the Chapel of Blessed Matrona
A tornado above the river Dnieper near the village of Volosskoye was formed in the afternoon of June 26. According to the eyewitnesses’ evidence, it had at least 100 meters (c. 328 feet) in diameter and was about 1 kilometer (c. 0.62 miles) high. The Life of Blessed Matrona of Moscow
Commemorated April 19/May 2
Matrona acquired spiritual discernment, vision, wonderworking and healing at an early age. Her family and neighbours noticed that she knew not only about people’s sins and crimes but their thoughts as well. She saw the coming of dangers and social catastrophes. Her prayer healed the sick and comforted the suffering.

The Church introduces a new feast-day of St Matrona of Moscow on March 8
The Russian Orthodox Church has introduced one more feast-day of St Matrona of Moscow—the day of the uncovering of her relics on March. The Synod has also approved for the Church-wide use the text of the service to St. John of Shanghai that had already been approved by Dioceses of the Russian Orthodox Church Outside of Russia.
×