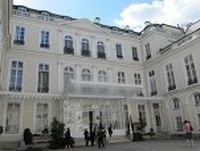 On September 13, 2013, at the invitation of A.K. Orlov, the Extraordinary and Plenipotentiary Ambassador of the Russian Federation in France, Bishop Nestor of Korsun took part in opening of the exhibition dedicated to the 400th anniversary of the house of Romanov, reports the communication service of the Department for External Church Relations with the reference to the website of the Diocese of Korsun. The exposition, "The Romanovs--the Dynasty Serving Russia" opened in the Villa d'Estrees Hotel in Paris, now the residence of Russian ambassador in France.

After the solemn opening of the exhibition, the archpastor looked at its exhibits, which included rare antique valuables connected with the house of Romanov, and communicated with the organizers and guests of the exhibition; among them there were the head of the Russian Imperial House Grand Duchess Maria Vladimirovna, the French singer Mireille Mathieu, the director general of the "Museum of Moscow" museum association A.N. Saprykina, as well as French members of the public and Russian emigres in France.