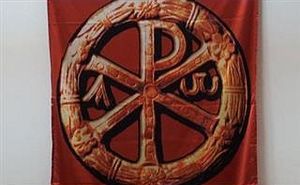 Photo: Tanjug Video
The celebrations of 1700th anniversary of the Edict of Milan will bring together seven heads of Orthodox Churches, including Ecumenical Patriarch Bartholomew, Patriarch Theophilos of Jerusalem and Patriarch Kirill of Moscow and All Rus' in Nis on Sunday.

Serbian Patriarch Irinej called on Thursday on all believers and people of goodwill to join in the final part of the marking of this great historic event.

Bishop of Backa Irinej Bulovic has said at a press conference that the celebrations will begin as soon as delegations arrive on Friday.

The central ceremony will take place on Sunday, when a liturgy will be held in front of the newly-built Church of Sts. Constantine and Helen in Nis.

According to Bulovic, archbishops of Cyprus and Greece, Metropolitan of Warsaw, a delegation from Bulgaria and representatives from Alexandria will also attend the celebrations.

The delegation of the Roman Catholic Church will be headed by Cardinal Jozef Tomko, and representatives of the Armenian Church will also be present.

Thanks to the Edict of Milan, the Christian faith and Church got the freedom of worshipping, which changed the face of Europe in terms of culture and civilization, Bulovic said.

Irinej thanks Kirill for support and love for Serbia

Serbian Orthodox Church (SPC) Patriarch Irinej Friday thanked Patriarch of Moscow and All Russia Kirill for the love he has shown for the Serbian people and for feeling the pains of Kosovo-Metohija as if they were pains in his own heart.

“You have visited Kosovo several times. We know that the problem of Kosovo is not only ours but also yours. You are able to solve the problem in the most appropriate way,” Irinej said while welcoming the Russian patriarch, who arrived in Serbia for the celebration of 1,700 years of the Edict of Milan, at Belgrade’s Nikola Tesla airport on Friday.

Patriarch Irinej said that the celebration of 17 centuries since the adoption of the Edict of Milan is an opportunity for Orthodox nations to come closer to each other, and also to extend their “brotherly hand to other close churches and religions.”

Patriarch Kirill said that the Milan Edict celebrations in Serbia are also an opportunity to analyze all issues of importance to the Russian and Serbian Orthodox Churches.

Patriarch Kirill said that the Edict of Milan defines the relationship between the church and state, which is the Christian foundation for the development of European civilization, and pointed to the need to constantly remind everyone about it when they try to deny the importance of the Edict of Milan. The All-Orthodox Celebrations of the 1,700 th Anniversary of the Edict of Milan

The All-Orthodox Celebrations of the 1,700 th Anniversary of the Edict of Milan
On October 5, a ceremonious moleben was performed at Archangel Michael Patriarchal Cathedral, after which His Holiness Patriarch Irinej of Serbia welcomed the leaders and representatives of the Local Orthodox Churches and other guests. The celebrations were widely covered in the local press, while the consecration of the cathedral was carried on live video feed.