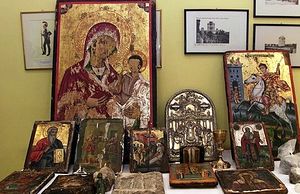 The police in Tirana, Albania, have confiscated over 100 icons and other works of art that had been stolen from Orthodox churches all over the country, and arrested two members of a band of smugglers.

A police representative said that the stolen things had been intended for selling abroad, reports Romphea.

Those arrested are two men, aged 39 and 52 years old, from the towns of Pogradec and Korce respectively, both having previous convictions for similar crimes.

Church robberies in Albania are wide-spread. Representatives of Orthodox communities are expressing their concern that those guilty are almost never found and punished. Mystery Over Albanian Hamlet’s Mass of Churches
The fact that Cercke in southern Albania has only a handful of residents but no less than 13 churches is a source of wonder to locals. Over 1000 icons labeled in Yaroslavl region
The Ministry for Internal Affairs on the initiative of Interpol has carried out an operational-preventive operation on October 21-28 in the Yaroslavl region with the aim of ascertainment and prevention of channels of transportation from Russia of stolen cultural treasures and of counteraction against their subsequent legalization.
×