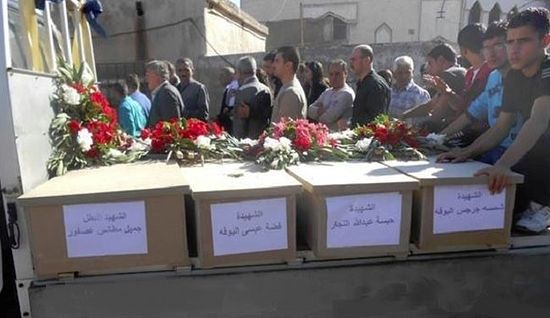 After the operation that liberated the Christian village of Sadad from the Giish and Jabhat al-Nusra militants, local residents discovered two mass graves that contained about 30 bodies of men, women and children, killed at the hands of the extremists around October 26–28 this year, reports Salam1.

According to eyewitnesses' evidence, the common graves of these Christian martyrs were not found at once. In the vicinity of the neighboring village of Zeidal the first burial site, a grave for ten people, was discovered. In the view of criminalists, five men killed last Saturday became the oppositionists’ first victims. All the other bodies were buried in the same grave on the following day. Together with the remains of the residents of Sadad who fled from their native village, the corpse of a well-known engineer, Colonel Sarkis Koriakos Sarkis, brother of the Syrian hero Matanius Sarkis (searched for by the militants), was found in Zeidal.

The second common grave, similar to the first one, was situated on the territory of Sadad, and contained about 20 bodies of men, women, children, and elderly victims, killed by the militants on the night of Monday, October 28.

The Biblical village of Sadad had been freed the day before, after a week-long siege by the Syrian army and volunteers from the Syrian National party.

The village of Sadad is a monument of world culture of exclusive importance—its history goes back as far as the second millennium B.C. The settlement is more than once mentioned in the Bible (Num. 34:8, Ezekiel 47:15). Al-Nusra Out of Syria's Ancient Sadad Town
Syrian Army regained control of the ancient town of Sadad after days of intensive fighting with militants from al-Nusra terrorist group.