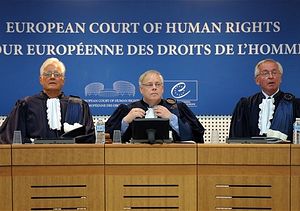 A law in Greece that allows civil unions for heterosexual couples but does not include same-sex partners has been declared illegal by the European Court of Human Rights (ECHR).

When a country provides legal recognition to unmarried heterosexual couples in the form of civil unions, the court said in a ruling issued Thursday, same-sex partners must also be able to benefit in the same way.

In a judgment in the joint cases of Vallianatos and Mylonas v. Greece and C.S. and others v. Greece, the Grand Chamber of the ECHR ruled that the Greek law violates the European Convention on Human Rights. In what has become the highly successful practice by lobbyists to overturn national laws, activists had brought the two cases to the ECHR demanding that the Greek government recognize same-sex partnerships.

Six of the seven applicants, the court noted, “live together” as couples in Athens or are “in a relationship “but for professional and social reasons do not live together.”

“The seventh applicant is a not- for-profit association, the aims of which include providing psychological and moral support to gays and lesbians,” the court said.

The law, entitled “Reforms concerning the family, children and society,” entered into force in 2008. The complainants said in a hearing in January 2013 that it was “designed only for couples composed of different sex adults had infringed their right to respect for their private and family life and amounted to unjustified discrimination between different-sex and same-sex couples, to the detriment of the latter.”

The law had been put in place to protect women and the children born within cohabiting unions and was supported in Parliament by the argument that limited legal recognition of opposite-sex civil unions would “reflect a social reality,” of widespread cohabitation outside marriage. It was intended to allow “the persons concerned to register their relationship within a more flexible legal framework than that provided by marriage.” Such “de facto” partnerships have increased by 2008 to include about five percent of all children born in Greece.

An explanatory report on the law submitted to the court noted that the law was intended to help women and their children who had been left “without any support after a long period of cohabitation, and the phenomenon of single-parent families generally.”

The report also emphasized that the law allowed status of religious marriage to remain “unparalleled” in Greek law and that “alongside civil marriage, [it] represented the best option for couples wishing to found a family with a maximum of legal, financial and social safeguards.”

The according to the government’s report said that civil unions were reserved for different-sex adults and concluded that they represented a new form of partnership and not a kind of “flexible marriage.”

“The report considered that the institution of marriage would not be weakened by the new legislation, as it was governed by a different set of rules,” court documents said.

During the debate before Parliament, the Greek Minister of Justice said, “We mustn’t include same sex couples. We are indeed convinced that the needs and demands of the Hellenic society do not cross this line; as a legislator, the political party in power is accountable to the Greek people; we have our own beliefs and negotiations are over; I believe it is the way to go.”

Livio Zilli, Senior Legal Adviser at the International Commission of Jurists, one of the activist groups that brought the case forward, said that the decision demonstrated that the Convention on Human Rights is “a living instrument to be interpreted in the present-day conditions.”

The state is “obliged under the Convention to take account of societal developments, as well as of the fact that there was no single way or choice when it came to people’s exercise and enjoyment of their right to family or private life,” he continued.

In related news, the government of Croatia has said that voters will be facing a December 1st referendum to decide whether to change the legal definition of marriage. The ballot will ask the question, “Do you agree that marriage is matrimony between a man and a woman?” If the vote supports natural marriage, the constitution will be amended to specifically define marriage as being between a man and a woman and prohibit same-sex “marriage.”

Croatia’s liberal President Ivo Josipovic has said he will vote No on the question, adding, “Do we need this kind of a referendum?”

“I think that determining marriage between a man and a woman does not belong in the constitution. A nation is judged by its attitude toward minorities,” Josipovic said.

A pro-family group had collected over 730,000 signatures to bring the referendum question to the public, but had been blocked by Josipovic’s left-leaning government. Although that number represented about 20 percent of the country’s total electorate – in a nation of about 4.3 million persons – the government had attempted to stall, claiming that not enough signatures had been gathered.

The Referendum Act requires that petitioners secure the signatures only of 10 percent of the electorate.

Nevertheless, Vesna Pusić Minister of Foreign Affairs attempted to block the vote by claiming that instead of the 3,760,000 citizens eligible to vote in the last European Union elections, there were 4,560,000. In a press release, the citizen imitative that had petitioned for the referendum called this “a number which almost certainly includes the deceased, ghosts, and double votes.”

Pusić also attempted to claim that, despite the wording of the law, that a referendum result would not be binding on the government.

The group, a grassroots coalition called, “In the Name of the Family,” says its task is to promote “universal human values, as well as religious associations, communities and movements – all those who hold the view that marriage is a union between a man and a woman only.” Russia denounced by euro-socialists for prohibiting promotion of homosexuality among minors
An attempt by Russia to protect the nation's youth from homosexual exploitation has provoked threatening language from a homosexual German minister and warnings from the European Union, according to local and international media. Why is the Orthodox Church Against Homosexuality?
Hieromonk Job (Gumerov)

Why is the Orthodox Church Against Homosexuality?
Hieromonk Job (Gumerov)
Holy Scripture calls any violation of Divine law a sin (see. 1 Jn. 3:4). The Lord and Creator bestowed particular emotional and physical qualities upon man and woman so that they would complete each other and thus make a unity. The Holy Bible witnesses that marriage, as a constant, lifetime union between a man and a woman, was instituted by God at the very onset of human existence.
×