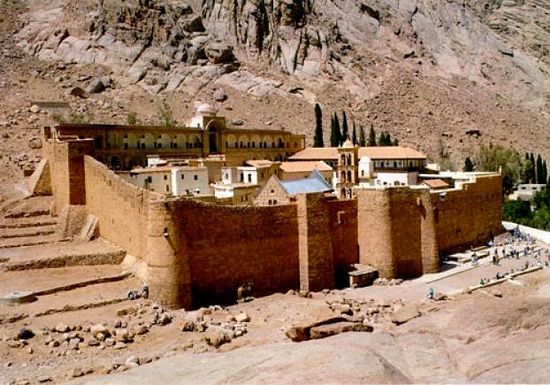 In his statement on November 7, the director of Research and Archaeological Studies Administration in the Sinai province DR. Abd ar-Rahim Raihan has confirmed inclusion by the Islamic Educational, Scientific, and Cultural Organization (ISESCO) of Abu Mena the Monastic complex (situated in 75 kilometers from Alexandria) and the Monastery of St. Catherine (Sinai) in its world heritage and culture list. Raihan has called this event "a victory", the role of whidh in strengthening of relations between Christianity and Islam cannot be overestimated, reports the Salam1 portal.

In the view of the scientist, this step of ISESCO has become the most important "milestone" in the process of the formation of a modern pilgrimage route for Christians from Europe through Alexandria to Sinai and then, to Jerusalem.

According to Raihan's report read last Thursday, at the present time there are two routes believers follow to "the Mount of Moses" and Sion. The departure point of the first, eastern one, is Jerusalem, and runs through Aila (present-day town of Aqaba). On their way from Aqaba to Sinai (St. Catherine's Monastery) pilgrims pass by Ain Khadra and a so-called "Pilgrims' gorge"—the rocks of which have preserved their ancient Nabataean, Armenian and Greek characters. The total length of this route is 200 kilometers.

The western route, which also begins from the city of the Prophets, goes around the northern part of the Sinai peninsula and the As-Suways bay. Here Christians pass through such well-known districts as Askalon, Gaza, Raphia (Rafah), Rinocorora (el Arish), Biliozom (el Pharma), Serpion (Ismailia), al Qalzam (as-Suways), Firan gorge and, at last, the Sinai Monastery. The length of this route is 375 kilometres.

The Raihan's statement has touched upon the issue of restoring the pilgrimage route that lies along Christian Coptic and Muslim Shrines of south Sinai as well. The expert has called upon the Church to support this initiative, giving attention to such stops important to Christians as St. Menas' well and the monastic complex of Firan (Pharan).

The scientist has suggested making an economic plan to raise ground: thus, to attract tourists, according to Raihan, to expand the reconstruction of the most ancient artifacts found during excavations on Sinai. A considerable part is assigned to develop exclusive excursion programs. "These monuments testify to the ongoing peaceful dialogue between the two greatest religions as well as the unity of our people,” stressed Abd ar-Rahim. “This is extremely important for our state".

While Sinai Monastery, which today uniquely preserves ancient manuscripts, was founded by emperor St. Justinian, the history of the marble Monastery of St. Menas, discovered in 1905 by the German archaeologist Kaufmann, goes back to the 5th century AD. St. Catherine's Monastery on Sinai refutes reports about attacks on it What lies beneath: Sinai’s hidden texts
he Greek Orthodox monks of St Catherine’s monastery in Sinai have been accumulating manuscripts and books since the sixth century, making their library the world’s greatest repository of early medieval writing after the Vatican. The collection is even richer than it first appears, because many of the 3,300 ancient manuscripts contain hidden text and illustrations older than their visible contents – and a large scientific effort is under way to reveal and record them. Spectral Imaging at the Library of St. Catherine's Monastery Reveals Ancient Texts
Father Justin, the librarian of St. Catherine's Monastery, and Michael B. Toth, the Sinai Palimpsest Project Program Manager, will speak at the U.S. National Archives and Records Administration on November 19, 2012 about a fascinating project they are managing: resurrecting texts from documents that are 1,000 to 2,000 years old.
×