In Arkhangelsk cross on grave of artic explorer restored 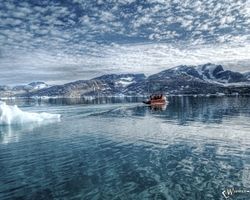 The monument on the grave of the famous seafarer Peter Pakhtusov at the old Solombal cemetery of Arkhangelsk was erected in 1886. This monument, situated behind the altar of the Church of St. Martin the Confessor, is of solid stone with bas-relief of a sailing vessel, and a tall metal cross. In 1990s the cross disappeared.

In 2013, on the initiative of the head of the central test site of the Russian Federation Andrei Sinitsin and the mayor of Arkhangelsk Viktor Pavlenko, the monument and cross were restored by photographs, reports the website of the Diocese of Arkhangelsk and Kholmogory.

Pakhtusov, Peter Kuzmich (1800-1835) was a well-known seafarer. He was educated at the Navigation school in Kronstadt, and took part in the expedition under F.P. Litke who was in charge of the first thorough investigation of the north coasts. He made the survey of estuaries of the river Pechora and of shores of the Pacific ocean. After these labors, Pakhtusov continued hydrographic works in the White Sea untill 1829, when he worked out the plan of the next survey of the Novaya Zemlya coasts.

The Russian Military encyclopedia of 1911-1914 says: "Thanks to Pakhtusov, we have maps of the eastern coasts of the Novaya Zemlya from its southernmost extremity to the Pakhtusov island, and further there is no coast survey as far as the Ledyanaya harbor yet".

In 1886, a monument to Pakhtusov was installed in Kronstadt. There is also a street named after Pakhtusov in Moscow. Cross set up at the bottom of the Black Sea A chapel to be erected on the Arctic Ocean coast
Residents of the town of Velikiy Novgorod in Russia will erect a chapel at the mouth of the Indigirka river on the coast of the Arctic ocean where descendants of ancient residents of Novgorod live. Rescuers find 'Robinson' on uninhabited island in White Sea
Rescuers of the Russian Emergency Situations Ministry searching for a missing employee of the Solovetsky monastery in the White Sea accidentally found a man, who survived a shipwreck in early October, the regional emergency situations department said.
×