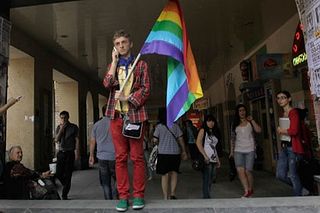 The Patriarchate of Georgia sees a danger in the initiative of the Georgian NGO, "Identity", that is actively defending rights of sexual minorities, of founding an orphanage for homeless children in Tbilisi.

The "Identity" NPO, which had several times organized protests in Tbilisi against violence towards LGBT that led to conflicts with the opponents, early in November put forward an initiative to open an orphanage for homeless and indigent children. At the same time, the NGO established a bank account for fundraising activity.

The statement of the Patriarchate notes that "Identity" is an advocate of rights of homosexuals and other sexual minorities and their active supporter.

"Of course, there is a danger that the ‘guardians’ will encourage such way of life, and it is very likely that minors will become followers of this orientation, and that is a violation of a child’s universally recognized right—the right to private life. It is unacceptable to both the Church and the whole society," says the statement. Minorities Should Keep in Mind Their Social Responsibility
An Interview with Hegumen Filaret (Bulekov)
The Moscow Patriarchate representative to the Council of Europe, Hegumen Filaret (Bulekov), commented at the request of an Interfax-Religion correspondent on the recent decision of the Strasbourg Court, which held that refusals by Russian authorities to hold gay pride parades are illegal.
×