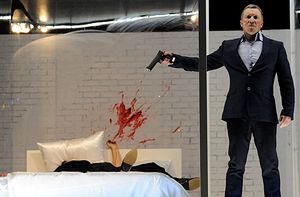 A group of ultraconservative activists sabotaged a theater performance in Moscow by yelling at the audience to fear God.

The incident happened during a performance of Konstantin Bogomolov's "An Ideal Husband" at the Chekhov Moscow Art Theater Thursday night, RIA Novosti reported.

Activist Dmitry Enteo, 24, and a woman got on stage and began preaching before they were pulled off by guards. Police said they detained two people on hooliganism charges after the incident, but did not elaborate.

Enteo told RIA Novosti that "An Ideal Husband" violates a recently enacted Russian law that punishes those who offend the feelings of religious people.