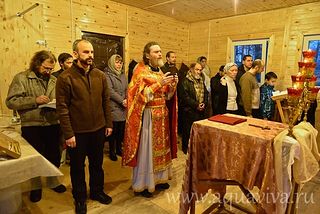 The foundation of the Chapel of Holy Royal Martyr Tsarevich Alexei was laid on December 12 in the Znamenka estate in Peterhof. Rector of the Church of Sts. Peter and Paul the Apostles Archpriest Alexy Koltsov placed the foundation stone, reports the Voda Zhivaya (Living Water) information agency.

"We see how through your prayers—all of you organizers, donors and workers of this church—this chapel is being erected. With out common prayer construction work is beginning—the pouring of concrete into the chapel's foundation. We are laying the stones, which were brought by you from pilgrimages to Holy places: Holy Mount Athos, the bottom of the Jordan river, Mount Sinai. They are a symbol of our prayers to God," said Fr. Alexy to those gathered.

The prayers for the foundation of a chapel, which will be read with the blessing of the Church hierarchy, is still to take place, but due to oncoming winter the construction is going quickly, and the walls have begun to be filled. 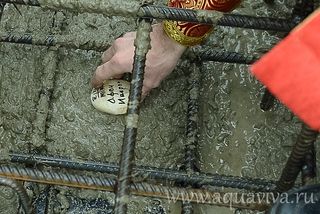 This is a rare case when a chapel is being built at the initiative of the people. Many anonymous people have contributed to this work by their fervent prayers to God and their care. This site is very symbolical for the people: over the last ten years, the Cross procession, which lasts for many days, has come to this destination with an icon of Tsarevich Alexei from Tsarskoye Selo. Other Cross processions through Russia, including sea processions, visited this place as well.

The Nizhnyaya Dacha, where the tsarevich was born, is currently not accessible for the celebration of services: it is situated on the territory of the State Peterhof Museum Reserve. There are also the Church of Sts. Peter and Paul, where Tsarevich Alexei was baptized, the Church of Holy Right-Believing Prince Alexander Nevsky, and the Church of the Transfiguration of the Lord there. No services are held in all these churches, though two of them are absolutely ready for services. The policy of the State Museum Reserve is such: "There are and will be no church services". That is why it was necessary to look for an opportunity to perform services as near to the birthplace of the Holy Royal Martyr as possible—the intersection of Tchaikovsky Street and Nizhnyaya Road.

"We cannot say that the construction is being carried out because of the local developer. His role is, most likely, one of sympathy. Cross procession members came to him, but it turned out that there had already been construction works here. Out of Russian hospitality, the developer first welcomed the Cross procession members, and then the grace that came with them, and after that, the very idea of building a chapel. He is one of those who supported this public movement, which is striving to restore shrines of the motherland," related Archpriest Alexy Koltsov to all those present at the laying of the foundation.

The chapel’s opening is scheduled for the 100th anniversary of Holy Tsarevich Alexei’s birth. Russia's Crown Jewels: The Royal Martyr Children
Matushka Natalia Sheniloff
The Romanov children—the Grand Duchesses Olga, Tatina, Maria, Anastasia and the heir, Grand Duke Alexis—were extraordinary in their ordinariness. Despite being born in one of the highest and most enviable positions in the world (from the secular point of view), and having access to all possible worldly goods, they lived and were brought up like ordinary children. Even more amazingly, despite being surrounded by a court environment made up of the entirely secular, godless and apostate aristocracy, the children grew up to be pious god-fearing and endowed with all manner of Christian virtue.

Miracles of the Royal Martyrs
Archpriest Alexander Shargunov
From that time on we often appealed to the holy Tsar Nicholas, and help came immediately under extraordinary circumstances. Since Tsar Nicholas Aleksandrovich was not only our Sovereign, but also head of a large family, we began to pray to him whenever we had family conflicts and disagreements. Peace was restored to our family very quickly. O holy Royal martyrs, pray to God for us!