A grim Christmas for those driven from Syria's Maalula 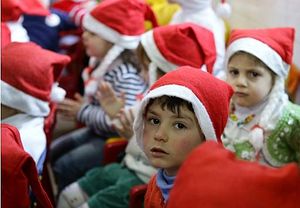 Photo: AFP
After fleeing a rebel assault on the historic Syrian town of Maalula, hundreds of Christian families sheltering in Damascus are preparing for a bleak Christmas away from home.

The picturesque hamlet -- where residents still speak the ancient Aramaic of Jesus Christ -- was a symbol of the long Christian presence in Syria's ethnic and religious mosaic, now shattered by war.

The residents of Maalula are among the millions of Syrians displaced by a war that shows no sign of ending, and what should be a joyful holiday season is instead the latest painful reminder of all that has been lost.

"The most beautiful gift I could possibly receive for Christmas would be to return to Maalula," whispered Hneineh Taalab, who fled in early September after jihadist fighters entered the town and is now sheltering at a Damascus convent.

Taalab said jihadists from Al-Nusra Front, a rebel group linked to Al-Qaeda, murdered her 20-year-old son Sarkis Zakhem when they took over Maalula on September 8, after four days of fighting troops loyal to President Bashar al-Assad.

"Al-Nusra also killed my brother and my cousin because they refused to convert to Islam."

The army briefly retook Maalula from rebels, but the troops were again expelled earlier this month as the Al-Nusra Front and other rebels swept into the mostly deserted town.

As Greek Catholic Patriarch Gregorios Laham III meets with the refugees in a dark and draughty church in Damascus he prays "for the return of love and hope" to Syria and mourns those who have been killed and kidnapped.

Christians, who make up some five percent of Syria's population, have largely avoided taking sides in the conflict, leading hardline rebel groups to charge them with being complicit with the regime.

Some 1,200 Christians are among the estimated 126,000 people killed in the conflict, according to Laham.

Another 450,000 Christians have been displaced, while 60 churches have been destroyed and residents of 24 villages forced to flee, he says.

No one knows exactly what happened to 12 nuns taken by rebels from their Maalula convent in early December, or the two kidnapped Orthodox bishops, or an Italian Jesuit priest who went missing.

"It is terrible. We are all under threat, Christians and Muslims," Laham says.

Laham distributes gifts to children from Maalula and money to "the families of martyrs" as he makes his way through the freezing church in Damascus, where this year's winter has been unseasonably cold.

The Maalulans are listless as they receive the handouts -- this year Christmas is a sealed envelope filled with cash.

'No tree, no manger'

Their thoughts return to Maalula, to an earlier time when the streets were decked with lights and wreaths and the cooking of holiday feasts filled their homes with warmth.

"Christmas in Maalula was joyful. We would decorate the Christmas tree, and friends and relatives would get together for midnight mass. People were happy," says Juliana, a 22-year-old refugee from Maalula.

"This year, we will attend mass of course but there won't be any Christmas tree or manger. We are refugees now."

Before the war tourists would flock to Maalula to visit cave dwellings dating back to the earliest years of Christianity and to escape the summer heat.

Najar Fadel, another refugee, recalls how Maalula was filled with Christmas cheer in previous years.

"Families would gather around their decorated Christmas trees, wreaths would hang from their balconies, they would welcome the New Year with banners everywhere, and the women of the house would spend time cooking a good meal," she said.

"But there's none of that now. Even if there is some celebration, it will be a sad Christmas. We don't have the money anymore, so the churches will take care of distributing gifts to the children." Christ is Born! Glorify Him!
Dr. Maria Khoury
It is within this darkness of all times and with the evil that has surrounded us that we need to be guided by the true Light of Christ. Since there is absolutely no peace in my world, I can only pray for inner peace that the newborn Christ brings to all. Syria Nun Kidnapping: Greek Orthodox Patriarch Urges Release of Maaloula Sisters
Mother Superior Pelagia Sayyaf and 11 nuns were kidnapped from St Tecla Orthodox monastery after it was overrun by rebel forces who had taken control of the city in southwest Syria.

Syria Christians targeted for supporting Assad
While Syria has turned into the scene of deep and spiteful aggression by the United States and its allies, Christians in this country are facing very difficult conditions.
×