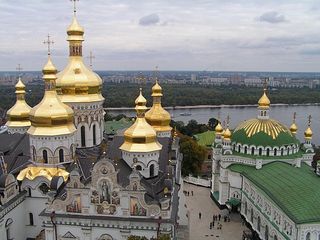 A great Orthodox shrine, the Gifts of the Magi, which according to the Holy Scriptures were brought to the Bethlehem caves as a gift to newborn Jesus by three Oriental wise men, has arrived to the Kiev Caves Lavra from Holy Mount Athos, accompanied by the delegation of monks of St. Paul's Monastery.

On January 24-30, the reliquary with gold, frankincense, and myrrh will stay in St. Stephen's side-chapel of the monastery's Dormition Cathedral.

The events of last several days in Kiev have not affected the preparation for the meeting of the Gifts of the Magi in the Kiev Caves Lavra, reported head of the Information and Educational Department of the Ukrainian Orthodox Church Archpriest George Kovalenko to Interfax.

Head of the organizing committee for meeting in Kiev of the Gifts of the Magi Archpriest Viktor Ivashchuk has reported to the agency that they did not address the police with a request for additional guards for the period of the stay of the shrine in the Lavra.

"The protection, as usually in such cases, will be insured by the State Protection Service and the internal guards of the Lavra," he said.

Moreover, according to him, heating posts, additional toilets, and distribution of hot tea will be arranged for the people, who will come to the shrine.

V. Ivashchuk noted that a great number of believers are expected to come to the Lavra - not only from all regions of the country, but also from neighboring countries—specifically from Russia and Belarus.

The Gifts of the Magi are to arrive to Kiev on January 24. On January 25-30 the relic will be available for veneration in the Kiev Caves Lavra. General who lapsed into a coma in Chechnya in 1995, brought to the Gifts of Magi

General who lapsed into a coma in Chechnya in 1995, brought to the Gifts of Magi
Relatives of a hero of Russia, colonel general Anatoly Romanov, who in October 1995 had been seriously injured as a result of the terrorist attack on the Minutka square in Grozny and fallen into a coma, brought him on Friday to the Gifts of the Magi in the Cathedral of Christ the Saviour. Nearly 40,000 pilgrims visit Cathedral of Christ the Saviour on Thursday