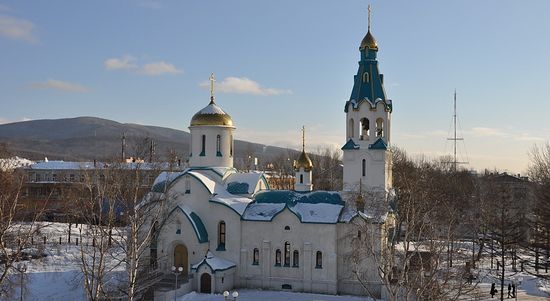 A gunman opened fire on Sunday in a Russian Orthodox cathedral on the island of Sakhalin, off Russia's eastern coast, killing a nun and a churchgoer and wounding six other people, officials said.

The shooting happened as Russian security forces are on high alert due to concerns about possible attacks on the Winter Olympics in Sochi, thousands of kilometres (miles) to the west. There was no apparent link to the Games. 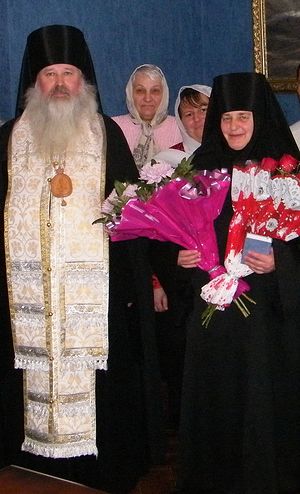 Murdered nun Ludmila
The gunman was detained at the scene after the shooting at the main cathedral in the city of Yuzhno-Sakhalinsk, on the island in the Sea of Okhotsk, north of Japan, the federal Investigative Committee said.

It added that the suspect had worked as a security guard in Yuzhno-Sakhalinsk, some 6,650 km (4,130 miles) from Moscow.

There was no immediate word on a motive in the attack, which came six days after a Moscow teenager killed a teacher and a policeman and held classmates hostage in the first major school shooting in Russia.

Most of the wounded in Sunday's mid-afternoon attack were shot in the legs and their lives were not in danger, RIA cited the regional leader of the Russian Orthodox Church, Archbishop Tikhon, as saying.

He said a prayer service for the victims would be held later on Sunday at the cathedral, which is the main Russian Orthodox church in a region that includes Sakhalin and the Kurile island chain.

The part of the church where the shooting took place would have to be cleaned of victims' blood and blessed, he added.

The Investigative Committee said psychiatrists would attempt to determine the suspect's mental condition.

There have been a handful of shooting sprees in offices and public places in Russia in recent years, but they are relatively rare and state-run media tend to treat such attacks as a largely American phenomenon.

The February 3 shooting at a Moscow school, in which a student used his father's rifles, has led to calls for stiffer punishment for gun owners whose weapons are used in attacks. Shooting in Sakhalin church nothing short of shocking

Shooting in Sakhalin church nothing short of shocking
The city in the oil and gas rich Russian island in the Far East is the last place on earth where one would have expected the kind of shooting that is ever so common in the United States. Terrorist bombing in Volgograd: mother shields her child with her body and is blown apart by explosion
At approximately 12.45 on Sunday 29 December 17 people were killed by a suicide bombing at the central railway station in Volgograd. At that time the railway station was particularly crowded. After three trains had been cancelled many passengers were crowded in the waiting room. Consecutive Volgograd suicide bombing kills at least 14
A terrorist attack in the Russian city of Volgograd has killed at least 14 passengers on a trolley bus. The explosion comes a day after a suicide bombing in the city which killed 17 people and injured scores of others.
×